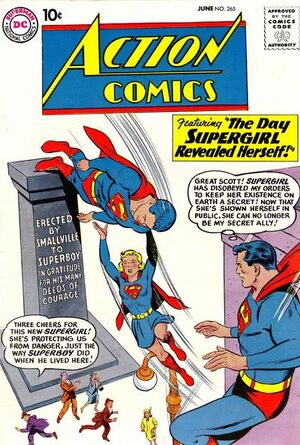 Appearing in "The Superman from Outer Space"Edit

Synopsis for "The Superman from Outer Space"Edit

While out visiting Professor Heath, Clark Kent and Lois Lane learn that he has built a robot detector device that would allow someone to tell if robot is really posing as someone. Clark ducks out so that he can attend a charity event as Superman, making Lois suspicious of Clark's double identity again. Hoping to prove that Clark Kent is Superman, she borrows the professors robot detector. Superman sees this with his x-ray vision, he is about to stop his Clark Kent robot from meeting with her when suddenly another costumed hero who resembles Superman flies out of the sky and smashes the robot and takes it's place, this mystery hero then covers for Superman, once again tricking Lois into believing that Clark is not Superman. Superman picks up "Clark Kent" and takes him to a private location.

He learns that the his "twin" calls himself Hyper-Man, and that he came from the planet Zoron, which suffered a fate similar to Krypton and he was its last survivor. Shot in a rocket to the planet Oceana where he would be adopted by the King family and take on the name Chester King. Living in the city of Marcopolis he would get a job as a newspaper reporter. Just like Superman, Hyper-Man has one weakness: Zoronite. He also has a girlfriend named Lydia Long. Having learned about Earth and it's Superman, Hyper-Man became curious of the Earth. He had also come to ask Superman to help protect his secret identity on Oceana. Before going Superman computers Hyper-Man's future in his Univac computer before leaving with Hyper-Man to Oceana. Hyper-Man is unaware that Superman secretly intends to reveal Hyper-Man's secret identity.

There, the two secret away to Hyper-Man's Fortress of Secrecy that is located in one of the planets oceans. There, he shows Superman a strange blue meteor that he had found before showing him the reason for bringing Superman to Oceana: His very own Hyper-Man robot is malfunctioning. Superman agrees to repair it while Hyper-Man resumes his civilian identity. When Superman finishes repairing the robot, he sends it to meet with Chester King and Lydia Long, but purposely rigs it to fall apart, making Lydia suspect that Chester is really Hyper-Man.

Next Hyper-Man has Superman dress up as him to participate for a 4th of July spectacular that both Hyper-Man and Chester King are expected to appear. The display involves shooting fireworks in space in front of a large audience flown up in an air-tight dome. During the festivities, Superman purposely brings a Zoronite meteor into the area to weaken Chester enough for people to notice and find his Hyper-Man costume underneath. With his secret identity exposed, Hyper-Man explains his plan to everyone, and doesn't begrudge Superman for "accidentally" revealing his secret identity. However, when Hyper-Man tries to fly off, he finds that his powers are gone. Now a normal man, Hyper-Man decides to marry Lydia.

Returning to Earth, Superman is visited by Supergirl, whom he relates his story. When Supergirl asks why Superman exposed Hyper-Man's identity he shows her what the Univac computer told him: That the blue meteor was a variant of Zoronite that was slowly poison him, it was going to strip him of his powers than kill him within a year. Superman revealed Hyper-Man's identity so that he could live at least a year of a normal married life with the woman he loved.

When Clark Kent is held hostage in a heist and locked in a bank vault with the other hostages while the crooks get away, he cannot change into Superman without revealing his secret identity. To track the crooks, he contacts his cousin Supergirl who tracks them as Linda Lee. When Clark is freed and can change into Superman, Supergirl leads him to the crooks where he easily captures them. After the episode, Supergirl wishes for a time when she herself can get all the fame and glory of her adventures instead of being Superman's secret weapon.

On her way back to the Midvale Orphanage, Supergirl is spotted by a scientist couple taking pictures of a comet in a gondola. The couple are blinded and don't end up seeing Supergirl, however the comet appears to have a fragment of Red Kryptonite. Effected by it she is given partial amnesia, and landing near Smallville, former home of Superboy, she decides to act as Supergirl there forgetting that she is supposed to keep her identity secret. Meeting the blind scientist couple, they mistake her for a nurse that was hired to take care of them. Deciding to establish a secret identity, she decides to play along, taking the identity of Gloria Smith.

After studying the life of Superboy, "Gloria" goes into action as Supergirl, publicly saving a bunch of people from a cesspool cover that has broken loose. Returning to the scientists home, she finds that they are no longer blind and have stumbled upon her secret identity, however they accept her and decide to keep "Gloria's" secret so that she can be Smallville's new avenger.

That night lightning strikes a robot stored in the Superboy museum, reactivating it and sending it on a rampage, and Supergirl goes into action to stop it. While at his Fortress of Solitude, Superman checks on the Bottle City of Kandor before checking on Supergirl with his x-ray vision. Realizing what's happened and learning that it's the result of exposure to Red Kryptonite, Superman decides to do some damage control. Unearthing a canister of amnesia gas that he disposed of years ago as Superboy, Superman sprays the town of Smallville and then erases all evidence of Supergirl's presence in the area by reprinting all the newspapers. The gas also restores Supergirl to normal (however she forgets about her Smallville adventure) and she returns to the Midvale Orphanage, wondering how the world would react once they learned of her existence.

Retrieved from "https://heykidscomics.fandom.com/wiki/Action_Comics_Vol_1_265?oldid=1393247"
Community content is available under CC-BY-SA unless otherwise noted.