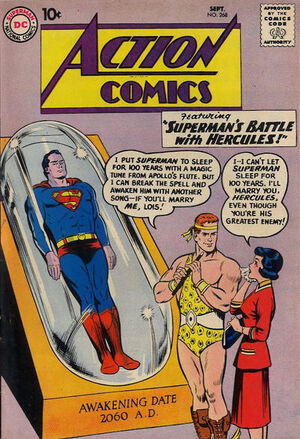 Appearing in "Superman's Battle With Hercules!"Edit

Synopsis for "Superman's Battle With Hercules!"Edit

Continued from last issue... Hercules has tricked the gods into granting him their powers so that he can defeat Superman and force Lois Lane to marry him, however he can only use each of these powers once. Arriving back Metropolis, he interrupts a special exhibit where Superman has built a flying saucer for a bunch of spectators and lights it on fire with the flames of Vulcan. He then ends up in a battle against Superman, using the various powers gifted to him both the other gods.

However, the Man of Steel proves to be the superior combatant, using his mind to easily overcome Hercules's attacks. After a number of failed attacks, Hercules tries to use Cupid's bow on Lois Lane, however, this plan backfires as she was looking at a picture of Superman when she was struck. Furious at being slapped in the face by a defiant Lois, he then summons Pan's flute and uses it to put Superman to sleep for the next 100 years.

Trying to force Lois into marrying him, Hercules is foiled when Venus appears and informs Hercules that the gods have found out that he intended to use their powers for malicious intent. Stripping Hercules of his additional powers and reviving Superman, Venus then departs. Fighting Superman with his advanced strength, Superman gets an idea of how to defeat Hercules. Taking them both through the time barrier, Superman's gamble pays off: Hercules like all others who travel through time unprotected with him, had lost all his memories of the future.

With Hercules having no memory of their confrontation, nor of Lois Lane, Superman bids farewell to the now friendly Hercules and returns to his own time. There, Lois asks Superman on a date, which he declines because he has to go out on patrol.

Appearing in "The Mystery Supergirl!"Edit

Synopsis for "The Mystery Supergirl!"Edit

When Midvale Orphanage is beginning it's summer tradition of giving the children work opportunities to learn a trade and make money, Linda (Supergirl) Lee volunteers to be part of the program. As luck would have it, Linda gets to work at the Daily Planet, where her cousin Superman secretly works as reporter Clark Kent. Perry White has her assigned to write a teenagers perspective of Superman's five greatest feats.

As she works for the Planet, reports of another Supergirl seen near Metropolis Bay is reported. Linda thinking it's her Supergirl robot, finds that it has not budged from it's hiding spot. As more and more reports of Supergirl make headlines across the globe, Linda decides to check things out as Supergirl and finds that this strange Supergirl has appeared all over the globe.

Resuming her guise of Linda Lee, Supergirl gets a moment to expose whatever is going on when this supposed Supergirl shows up at the Daily Planet. Making a fake Kryptonite meteor, Linda dumps it in front of the faux Supergirl, causing her to panic, revealing her hoax. With the jig up, "Supergirl" admits that she is one of many actors hired by Ace Movie Studios to help boost public interest in a Supergirl movie currently in the works.

Going to Ace Studios, the press learns the whole publicity stunt was done using special effects and none of the girls used had any super-powers. The movie opens shortly thereafter and proves to be a successful film, and the public once more believes that Supergirl (at least for now) is but a work of fiction created by Hollywood.

Retrieved from "https://heykidscomics.fandom.com/wiki/Action_Comics_Vol_1_268?oldid=1395767"
Community content is available under CC-BY-SA unless otherwise noted.