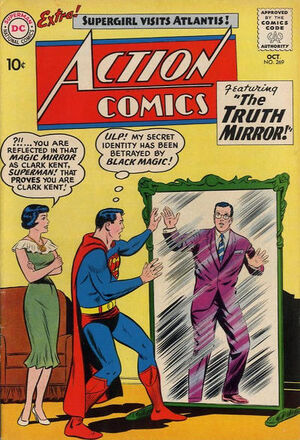 Appearing in "The Truth Mirror!"Edit

Synopsis for "The Truth Mirror!"Edit

As Superman patrols over Metropolis, Lois Lane gets a package from her Uncle Ned from England. In it, she finds a mirror which was supposedly owned by Merlin the magician and would reflect the true nature of whoever was reflected in it. When "Fred Caldwell" comes posting as a representative of a charity, the mirror shows him in prisoners garb, prompting Lois to agree to meet with him later. Reviewing the Daily Planets files, she learns that the man is really "Flash" Dugan, a known criminal and tells the story to Clark, prompting him to capture Dugan as Superman.

After the mirror reveals that her friend Hazel is temporarily bald, that Perry White has a heart of gold, and Jimmy has a swelled head, she invites a child into her home who claims they are lost. But it turns out that the "child" is really a midget burglar and when she exposes him, he ties her up at gun point and then begins to loot her home. Resourceful, Lois manages to dial Clark Kent using her mouth and a pen to operate the rotary phone. Clark in turn "calls" for Superman's aid, and the Man of Steel saves Lois, easily dealing with the midget burglar.

Lois decides to use the mirror to learn Superman's secret identity, and invites Superman over to her place. Sure enough, when Superman stands before the mirror, it reveals that he's really Clark Kent. Before he can answer for himself, there is a radio call for Superman to defuse a bomb that has been planted on a plane full of comedians. He arrives there, and the doubtful jokers don't believe Superman, even when he finds the bomb (hidden in a stop watch) and places it in his mouth where it harmlessly goes off. It's not until they see Superman fly away do they realize how close to death they were. This repast gives Superman a moment to come up with an idea to trick Lois into once more doubting that Clark Kent and Superman are one in the same. Building robots of himself and Lois that are scarecrow thin, Superman replaces the mirror with a pane of glass, and then changes the inscription on the back of the mirror. When Lois once more has Superman look into it, she is horrified to find sickly thin versions of themselves looking back at her. Superman then turns the mirror around and Lois reads the inscription: "This Mirror Tells The Truth, but It May Also Lie To You!" Furious, Lois smashes the "mirror" once more unsure of Superman's true identity.

Later Superman leaves Lois's home and dumps the real mirror into a volcano before returning to his Fortress of Solitude with his robots.

When saving a girl from an injury on the swings, Supergirl has to act fast that she is witnessed doing this super feat by Freddy Blake. She manages to deflect Blake's probes, however she doesn't end his suspicion. Later when Miss Hart takes the children on a boat ride, they get caught in a nasty storm, seeing this with her x-ray vision, Linda changes into Supergirl and secretly saves them from danger.

While underwater, Supergirl is contacted telepathically by Lori Lemaris from Atlantis. Answering the summons, she is asked by the Atlantians to help ancient Atlantian weapons that have run amok. Shown to the site by Jerro, a young merman, Supergirl is instantly smitten by the young boy. After smashing the weapons, Supergirl is given a tour of the many sites in Atlantis by Jerro. When she wonders what it would be like to kiss him, she realizes that all Atlanteans are telepathic and realizes that he must have read her thoughts. Embarrassed, she leaves to return to the mainland. There she is once more scrutinized by Freddy who notices that her hair is wet. Distracting him she uses her super speed to dry her hair, she once more pulls the wool over his eyes. That night all she can think about is Jerro and wonders when she will see the mer-boy in the future.

Retrieved from "https://heykidscomics.fandom.com/wiki/Action_Comics_Vol_1_269?oldid=1395768"
Community content is available under CC-BY-SA unless otherwise noted.