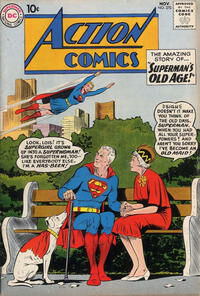 Appearing in "The Old Man of Metropolis!"Edit

Synopsis for "The Old Man of Metropolis!"Edit

Visiting Midvale Orphanage on assignment for the Daily Planet, Clark Kent writes about the children who are up for adoption. Naturally, Linda Lee (secretly his cousin Supergirl) of course does everything imperfectly so as not to entice any would be adoptive parents to adopt her. However, she gives him an essay she wrote titled "My Career as Superwoman" which explains how when Superman retires due to old age, she will be the adult Superwoman and take her place.

Returning home and recuperating after a previous exposure to Kryptonite, Clark awakens when he sees a run away rocket. Changing into Superman, Clark smashes into it and it explodes. When he lands he finds that he has been transported to the future and he is now an old man. He soon discovers that Supergirl (now Superwoman) has taken his place, and that the years of exposure to Kryptonite has deteriorated his super-powers. Changing into his civilian guise, Superman goes to the Daily Bugle, to learn that it's now being run by Jimmy Olsen, Perry is dead, and that he's been retired for years after revealing his secret identity. Insult to injury, Superwoman's alter ego Linda Lee has taken up Clark's old job, and he needs to wear glasses to read.

Realizing that he's all but forgotten, he decides to pay a visit to Jimmy at home and is surprised to find that him and Lucy Lane are married and have children. Jimmy gives Superman his signal watch, because he doesn't need it and suggests that Superman use it whenever he needs help from Superwoman. Superman further disturbed to find that his old nemesis Lex Luthor has reformed and become the mayor of Metropolis, this fact revealed to him by Superwoman. When he spots Krypto being nabbed by a dog catcher, Superman tries to call Superwoman to help his old pal, but the device breaks in his hands. Buying a hover vehicle, he flies to his Fortress of Solitude to find that Superwoman has also taken control of the location, putting all his old souvenirs in storage, also forgotten. Returning to Metropolis, he finds a chunk of Kryptonite and picks it up, a police officer spots him and arrests Superman due to a law making possession of Kryptonite illegal due to the fact that it can harm Superwoman.

Locked up in a cell with his old adversary Bizarro, Superman finds that his old nemesis is just as old and forgotten as he is. Superman is then bailed out by Lois Lane who tells him that they never married and that she wasted her youth waiting for Superman to propose to her. Suddenly, Clark wakes up and realizes it was all a dream, however, taking this possible future with some thought, Clark arranges for a delivery of flowers to Lois Lane in the name of Superman.

One day at Midvale Orphanage, Linda Lee learns that her fellow orphan Frank Cullen may potentially be adopted by pro-golfer Vince Gordon. When luck seems to be working against him, Linda changes into Supergirl and secretly uses her powers to give Frank a helping hand which leads to Gordon adopting him. After watching a newsreel about Superman's latest adventures as Linda, Supergirl then learns that Krypto is in trouble. Traveling out into space, she finds the super-dog being captured by an alien ship that collects alien creatures. Supergirl then uses her powers to free the Dog of Steel.

Supergirl is then called to Atlantis where Lori Lemaris asks for her help in stopping the Atlantian criminal Malo who has stolen treasure from Atlantis. At first Supergirl is unable to match Malo's trident which can repel her body, however she uses the criminals greed to get him to put his trident down, further confusing him with duplicates of his weapon, Supergirl easily defeats him and turns him over to the Atlantean authorities.

Next Linda's x-ray vision picks up a man who may stumble across the Batcave, and so (knocking out people in her class by sucking out all the air and doing the same thing in the Batcave so that she is unseen) she goes into action, sealing all the openings in the Batcave, protecting the Dynamic Duo's privacy. At the end of the day, Supergirl is summoned to the Fortress of Solitude, where Superman gifts her with a special make-up applicator that she can stash her costume in. Suddenly, her Atlantian Friends, Batman, Robin, Krypto and Superman surprise her with gifts and a giant birthday cake celebrating her 16th birthday. Superman explains that all the adventures she had that day were orchestrated by them as part of their birthday plans. After getting fanfare from the people of Kandor, Superman unveils one last present: A room dedicated to the exploits of Supergirl in the Fortress of Solitude.

Retrieved from "https://heykidscomics.fandom.com/wiki/Action_Comics_Vol_1_270?oldid=1395769"
Community content is available under CC-BY-SA unless otherwise noted.