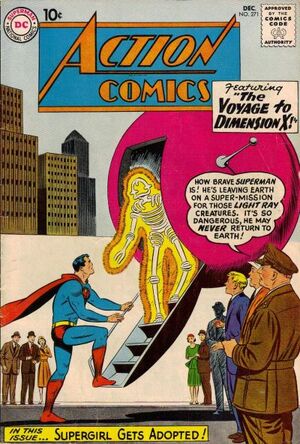 Appearing in "Voyage to Dimension X!"Edit

Synopsis for "Voyage to Dimension X!"Edit

When a strange alien ship appears over Metropolis, Clark Kent and Lois Lane are sent to get the story. Clark manages to slip away briefly and change into Superman and attempts to stop the ship, and see who is inside, but his x-ray vision cannot penetrate it, so he joins back up with Lois as Clark Kent. The ship continues to fly about the city performing good deeds all around. Superman continues his investigation, and eventually the alien ship stops and tells the people of Earth (projecting an image of one of the aliens) that it's from Dimension X and that they have come seeking Superman's aid stopping a super menace in their realm. Believing the story, Superman willingly walks into a trap set by his nemesis Lex Luthor. In reality the lead ship is only sent to the desert far away from Metropolis, and Luthor (using an exchanger device to switch with a robot duplicate himself while in prison) begins new criminal operations in Superman's absence.

When Superman learns the truth, and before he attempts to smash out of the satellite, a recorded announcement from Luthor explains that the any attempt to escape the shuttle will cause a neutron bomb planted in Metropolis to explode. To further his own ends, Luthor has a robot duplicate of Superman return to Metropolis and proclaim that the people of Dimension X require Earth's nuclear arsenal to destroy the menace that threatens their world, and for his own personal amusement, Luthor has the Superman robot toy with Lois Lane's emotions by asking her out on a date and kissing her.

Luthor intends to use the nuclear bombs to hold the world hostage and make himself ruler of the Earth. However, Superman finds a way out of his predicament: Hearing a thunderstorm, he uses his super-powers to knock the satellite into the path of a thunderbolt, which fries it's inner workings allowing Superman to break free and easily foil Luthor's plot, returning all the nuclear weapons, rounding up his gang and smashing Luthor's robot duplicate.

Appearing in "Supergirl's Fortress of Solitude!"Edit

Synopsis for "Supergirl's Fortress of Solitude!"Edit

After rescuing Streaky from an attacking dog, Linda Lee happens upon another television report about Superman's adventures. Thinking about someday saving the world just like her cousin, Supergirl decides that she too should build her own Fortress of Solitude. Getting a bunch of building material she secretly builds her own fortress in the middle of a desert and begins loading it up with souvenirs and private attractions about her exploits as Supergirl, including statues that reveal her secret identity.

When Streaky once more exposes himself to the X-Kryptonite and gains super-powers he tracks Supergirl down to her fortress, prompting her to build a room specially for Streaky until his powers wear off. As she returns Streaky to Midvale, a group of archeologists accidentally uncover Supergirl's fortress. Professor Brant convinces his wife and colleague that since Supergirl's identity is secret for now, they should erase their memories with a post-hypnotic suggestion. However, Brant only does so to his college and he and his wife conspire on how they can blackmail Supergirl into doing their bidding.

They go to Midvale Orphanage and arrange to adopt Linda Lee, and at first being to spoil us. At first, Professor Brant leads Linda to believe that they need more money for new explorations, prompting her to go out in secret as Supergirl and find them diamonds and other items of value to fund expeditions. However, the Brant's soon reveal that they know Supergirl's secret identity and demand that she continue to collect wealthy items for them. Eventually the greedy couple has Supergirl steal a statue from the people of Gaz, and well as other treasures including the Taj Mahal. However, things are foiled for the Brant's when Streaky once more gains super-powers and goes looking for Supergirl. Exposing the Brant's to his own x-ray vision wipes out their memories of Supergirl's identity. Supergirl then secretly returns all the stolen property, and orchestrates things so that the Brant's return Supergirl to the orphanage.

Realizing the potential dangers of have her own Fortress of Solitude at the present time, she and Superman work together to destroy it completely before Supergirl returns to the orphanage in her civilian identity, wondering if she'll ever build a Fortress again.

Retrieved from "https://heykidscomics.fandom.com/wiki/Action_Comics_Vol_1_271?oldid=1395770"
Community content is available under CC-BY-SA unless otherwise noted.