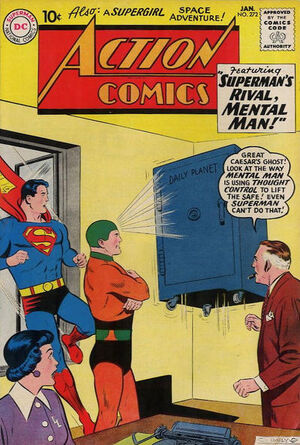 Lois Lane has started a comic strip in the Daily Planet which features a super-hero named Mental Man, the strip becomes incredibly popular. Everyone is shocked when Mental Man suddenly comes to life and appears in the middle of the Daily Planet, stating that he wishes to get to know his creator, Lois Lane. After proving that he is the genuine article by showing off super-feats, Superman arrives for an interview with Perry, and arrives just as Mental Man proposes to Lois Lane. Lois tells Mental Man that she has to think it over, and get to know him better first, prompting Superman to leave.

Mental Man begins courting Lois and impressing her with his super-feats, and trying hard to upstage Superman in a bid to make her love him instead of the Man of Steel. He's soon confronted by "Ace" Ruggels who offers him a proposition. Lois cautions Mental Man in dealing with Ruggels because he is a racketeer that Superman has been trying to apprehend for years. When Mental Man meets with Ruggels and his men, he agrees to help them steal money being transported in an armored car in return for a sure fire way to get Lois Lane to fall in love with him.

When Ruggels accuses Mental Man of killing Superman, the Man of Steel arrives alive and well, and Ruggels and his men are arrested. Afterwards, Mental Man reveals himself to really be Aquaman in disguise. With a little help from Krypto and a lot of trickery, Superman had Aquaman help with the Mental Man hoax in order to implicate Ruggels in a crime so that they could arrest him.

Appearing in "The Second Supergirl!"Edit

Synopsis for "The Second Supergirl!"Edit

After a lesson on snowflakes during class at Midvale Orphanage, Supergirl gets an idea and goes to visit her cousin Superman at his fortress of solitude. There she asks to use his Super-Univac computer to see if there is another world that is almost like Earth where she could act as Supergirl to test her abilities while maintaining her secret status on Earth. Using the computer, she finds an almost identical copy of Earth, a planet called Terra far off in the universe, she then leaves the Earth to visit this world.

While the planet Terra appears to be similar to that of Earth, it has some startling differences: The Statue of Liberty carries a flag instead of a torch, national monuments are in different geographical locations, city names are slightly different, and inventions and animal species are slightly different. When witnessing a Tigerabbit on the loose at the local zoo in her Linda Lee guise, Supergirl is about to spring into action when she stops when she sees the arrival of yet another Supergirl -- her spitting image, however this super-being is named Marvel Maid. After watching her daring rescue, she follows after Marvel Maid and finds out that she has her own Fortress of Solitude, an artificial satellite over Terra called the Fortress of Marvels.

There Supergirl introduces herself, and asks if Marvel Maid would mind if she stood in for her to practice her super-deeds on Terra to see if she's ready to do the real thing on Earth. Supergirl learns that Marvel Maid came from an underground world, and that her father, Jaal-Kor sent her to the surface world when their society soon collapsed. Marvel Maid was found on the surface by a family who took her in and she became Marvel Maid. When danger threatens a prehistoric planet, Marvel Maid goes to answer the call, and allows Supergirl to take her place in society. Learning about Marvel Maid's civilian identity, Supergirl goes to work as Lea Lindy, cub reporter for the Marcopolis Daily Planet, run by Perry Waite While out on patrol as Marvel Maid, Supergirl meets Marvel Man, the realm Marvel Maid's cousin who also escaped the destruction of their society but was put in suspended animation along the way and revived years later when he grew into an adult. In an ironic role reversal, Marvel Man has the same luck as Supergirl does on Earth: He is forced to keep his identity a secret, and during the day poses as Ken Clark, a prisoner at the local prison.

She learns that Ken is very clumsy and still needs to learn how to use his powers. Deciding to help him out, Supergirl aids him when (back in his civilian guise) the warden decides to select Clark for a test subject for a strength enhancement, making them decide to select another subject. Later, helping to teach him to fly, Supergirl decides to distract a nearby mother and daughter by making a diamond out of coal and leaving it for them to find. At that moment, a meteor strikes the Fortress of Marvels, and it crashes on Earth. Supergirl is also horrified to find that -- similar to Kryptonians and Kryptonite -- the Marvels weakness is diamonds. She learns from the weakened Marvel Man that diamonds are also illegal on Terra. Witnessing the damage done, Supergirl is mortified by everything she has done. This story is continued next issue...

Retrieved from "https://heykidscomics.fandom.com/wiki/Action_Comics_Vol_1_272?oldid=1395771"
Community content is available under CC-BY-SA unless otherwise noted.