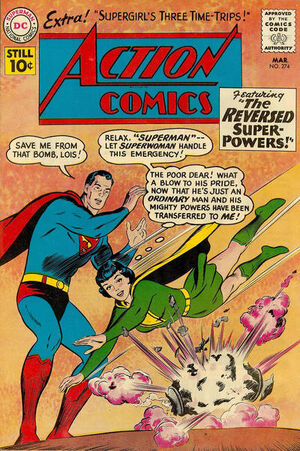 Appearing in "The Reversed Super-Powers!"Edit

Synopsis for "The Reversed Super-Powers!"Edit

Superman arrives at the Daily Planet and tells Perry White that he may be close to finding a cure for his weakness to Kryptonite, and so Perry assigns Lois Lane to go to Superman's Fortress of Solitude to cover the story. During the experiment there is an explosion that seemingly strips Superman of his super-powers. Realizing that he's now just a mortal man, Superman asks Lois to finally marry him, however Lois isn't sure if she loves Superman for who he is or for his super-powers and tells him that she needs to think about it. The two are returned to Metropolis by one of his Superman robots.

Back in Metropolis, the duo realize that once the criminal world learned that Superman is now ordinary, he would become a target instantly, so Lois decides to only report that the experiment failed and nothing else. Everyone continues to consider Superman the mightiest mortal on Earth, however when in private with Lois, Superman can't help but feel like a sham.

When other men fall head over heels for Lois but resist the urge to propose to her because of her relationship with Superman, she begins to wonder if she really does care for the former Man of Steel. Returning home, Lois is shocked to find that she has super-powers just like Superman had, and when she hears reports of a tornado about to attack Metropolis, she goes to the rescue and after showing Superman her discovery destroys the tornado before it can do any damage. Although Superman is proud of her use of her new powers, his pride is hurt from the fact someone other than he had to save the day.

After a series of super-feats, Lois takes Superman out on a drive and tells the Man of Steel that she cannot marry him because he doesn't have any super powers anymore and that he'd constantly be at risk and miserable. Later, Superman appears at her office and tells her he's leaving for good, when he suddenly collapses. To her shock Superman is dieing, and Lois soon realizes that she lost her super-powers as well. Another Superman enters the room, this one is the real Superman, and still has his super-powers. He explains to Lois that this is one of his Superman Robots (model Z), and asks the robot why he disobeyed his orders. The robot explains that after years of observing Lois trying to trick Superman into marrying her, it took it upon itself to see that she if she is worthy of the privilege. The robots assessment of the situation is that Lois only loved Superman's powers, not the man itself otherwise she would not have turned down his proposal, and with that the robot deactivates.

Lois is devastated by this revelation, however Superman tells her not to let the robots judgment make up their minds, suggesting that the robot was correct that if one of them had super-powers and the other did not, they would be a miserable couple, and flies off.

After secretly helping fellow orphan Eddie Moran get adopted by famous swimmer John Stark, Supergirl (as Linda Lee) attends her classes and finds out that they have to write an essay about which historical figure they would be. Being hard pressed between Annie Oakley, Betsy Ross, and Pocahontas, Supergirl decides to travel back in time to witness these great women in action.

Her first stop takes her to the year 1885, there she finds Annie Oakley getting ready for a show but falls ill, Supergirl decides to take her place as they look similar. With the aid of her super-powers, Supergirl manages to wow the audience and help spark the Oakley's popularity and legend. Supergirl has to leave when she is shocked to find that there is a chunk of Kryptonite in the arena, she later leaves before Annie Oakley revives and gets all the praise for her "performance."
Traveling to the year 1776, Supergirl witnesses Betsy Ross invent the American flag, and follows it's travels to George Washington. When the flag is accidentally burned when the wind carries it onto a fire pile, Supergirl quickly stitches up a new one and secretly places it back in the carriers hands who isn't the wiser. When she goes to watch Washington receive the flag, she is once more surprised to find that the rock Washington is sitting on is Kryptonite.

Her last trip takes her to the year 1607, where she witnesses Pocahontas preventing John Smith from being executed. This leads to Pocahontas being caged in a hut, and her tribe warring over he life. Taking a cue from Pocahontas praying to Manitu, Supergirl goes into action and breaks up the fight, however has to leave once again because one of the natives tomahawks is made of Kryptonite as well.

Returning to the present, Supergirl meets with her cousin Superman because she is puzzled how there can be Kryptonite in Earth's past during a time when Krypton hadn't yet exploded. Superman relates to a story where he had to dispose of a h-bomb that was about to explode. Coincidence would have it, as the bomb exploded a Kryptonite meteor struck the explosion, Superman figured that the Kryptonite was vaporized, however realizes that it was blasted into chunks and sent back in time. Returning to her civilian guise of Linda Lee, Supergirl realizes that her fellow classmates all selected the three women she visited in the past, and instead opts to write an essay about Joan of Arc.

Retrieved from "https://heykidscomics.fandom.com/wiki/Action_Comics_Vol_1_274?oldid=1395773"
Community content is available under CC-BY-SA unless otherwise noted.