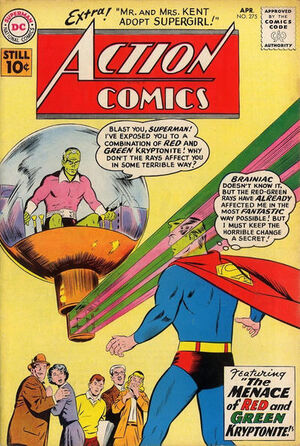 Appearing in "The Menace of Red-Green Kryptonite!"Edit

Synopsis for "The Menace of Red-Green Kryptonite!"Edit

When Brainiac exposes Superman to a combination of red and green Kryptonite, it causes him to grow a third eye in the back of his head. To conceal this, Superman pretends that the Kryptonite exposure compels him to don different kinds of hats and to use his powers in the manner suggested by the use of the hat (for instance, wearing a turban and using a giant crystal ball in a super-deed). Later, Superman uses the heat vision from all three of his eyes to break through Brainiac's force-field, knocks him out, and sends him back through space and time to a

At the Fortress of Solitude, Superman shows Supergirl a tableau of him with his adoptive parents Ma and Pa Kent. This upsets Supergirl, who hopes to someday have an adopted family of her own. Returning to Midvale Orphanage as Lind Lee, Supergirl has a dream about her being sent to Earth in a rocket by her cousins parents instead of Superman himself.

The dream depicts a story where Supergirl is found by Ma and Pa Kent who raise the girl in Smallville. Her childhood is similar to that of Superman growing up as a baby. As a teenager she attends high school as Linda Kent and wants to get the attention of Bob Benson, who ends up being Lana Lang's boyfriend. She ends up getting stuck with Lex Luthor on dates instead.

She begins a career as Supergirl, preforming super feats and daring rescues and becomes the iconic protector of Smallville in the same way her cousin did. Later, a new rocket from Krypton crashes on Earth and she gets her very own super-pet: Squaky, the Super Parrot. Being spurned by Bob as Linda (who sent her an awful note calling her a drip), she wins his affections as Supergirl.

When Lex Luthor stumbles upon Supergirl's true identity, he decides that he should do Linda a favor and prove to Bob that she is really Supergirl. Giving Bob a compact with Uranium dust in it, he tells Bob to give it to Supergirl as a gift, and then find Linda later with a Geiger counter to see if her compact sets it off. This plan works, and Bob suddenly proposes to Linda. Remember how poorly he treated her before, Supergirl rejects him.

Linda wakes up from her dream wondering how strange they are and wonders what future dreams might bring.