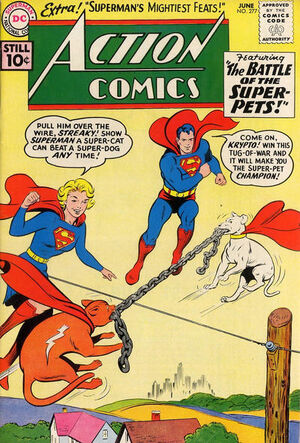 Appearing in "The Conquest of Superman"Edit

Synopsis for "The Conquest of Superman"Edit

A disaster erupts while Superman is off-planet. Having nowhere else to turn, the authorities free Lex Luthor from prison so he might aid them in preventing an airplane carrying a hydrogen bomb from crashing. Luthor uses anti-gravity equipment to save the plane, but then turns it on the police so that they cannot return him to prison.

Afterwards, he returns to the Luthor Lair to plan his next scheme against Superman. Luthor uses his weird technology to rob the federal gold reserve from Fort Knox. Superman arrives on the scene, but Luthor scares him off with Kryptonite. Back at his lair, Luthor laughs over the fact that the Kyrptonite he used was fake. But his victory is short lived however, as he discovers that the foe he defeated was actually one of Superman's robots. Enraged over the hollow victory, Lex returns all of the gold to Fort Knox.

Appearing in "The Battle of the Super-Pets"Edit

Synopsis for "The Battle of the Super-Pets"Edit

Krypto helps to protect Supergirl's civilian identity of Linda Lee, by preventing a prospective couple from adopting her from the Midvale Orphanage. As such, Supergirl shows favor to Krypto – a gesture that incurs the wrath of her cat, Streaky. Streaky attacks Krypto in a fit of rage. Superman arrives and Supergirl and he have to pull the two animals apart.

To settle the dispute, they decide to hold a series of contests between the two pets. Supergirl takes the animals to a far-distant planet and has them challenge each other to various games. But what Supergirl doesn’t realize is that this planet is one of the worlds frequently used by Mister Mxyzptlk for his various pranks. As such, the two animals fall prey to various left-behind toys. Supergirl falls into a Kryptonite trap and Krypto and Streaky help her to escape.

As they decide to leave the planet, Beppo the Super-Monkey arrives to accompany them on the journey back to Earth.

Retrieved from "https://heykidscomics.fandom.com/wiki/Action_Comics_Vol_1_277?oldid=1395776"
Community content is available under CC-BY-SA unless otherwise noted.