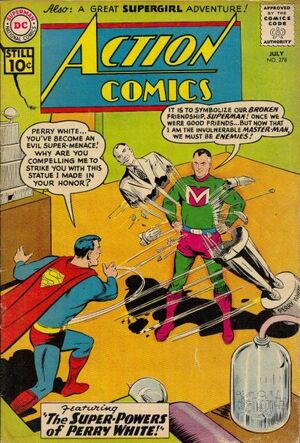 Appearing in "The Super-Powers of Perry White!"Edit

Synopsis for "The Super-Powers of Perry White!"Edit

While out relaxing in his garden, Perry White spots a strange alien plant growing in his yard. Perplexed by it's appearance, he none-the-less eats one of it's fruits and goes about his business. Later that day he has trouble opening his safe when suddenly he gains super-human strength and rips the door right off it's hinges. Perry initially dismisses the situation as a fluke, but later on he realizes he's gained powers similar to that of Superman, including super strength, flight and x-ray vision. Later while supervising a color photo shoot of fake Kryptonite, Perry wonders if he has the same weaknesses as the Man of Steel.

Curious to know, Perry fashions a costumed identity and calls himself Masterman (being careful to line his mask with lead to protect his identity even to Superman) and go out to test his powers and learn their weaknesses. Flying into space, Perry learns that he is immune to the power of Kryptonite and returns to Earth and appears in the public as Masterman. Returning to his civilian guise, he gloats to himself over how the Daily Planet staff is stumped over Masterman's true identity. When Jimmy Olsen makes up a lame excuse to get off work so that he can see a baseball game, Perry sees through the lie when his x-ray vision spots baseball tickets in his pocket. Perry catches Jimmy by allowing him to take the time off, but states that he is going to have to cover the game himself.

When a lion escapes from the Metropolis Zoo, both Clark Kent and Perry White excuse themselves to change into their respective secret identities. While changing into Superman, Clark uses his x-ray vision and spies on Perry changing into Masterman, learning his identity. Deciding to investigate how Perry got these powers, Superman watches as Masterman recaptures the lion and returns to his home. Spying on Perry with his x-ray vision, Superman is shocked to find that Perry has been taken over by an alien plant lifeform called Xasnu, who contacts his masters on his home world and reports back to tell them that the only way their invasion of Earth can succeed is if they eliminate Superman.

As Xasnu researches everything there is to know about Superman, the Man of Steel contrives a countermeasure to stop the alien being. First, he sends Supergirl out on a mission into space while he hypnotizes himself to not feel pain when exposed to Kryptonite. Back at the Daily Planet as Clark Kent, Superman allows Perry to spy his Superman costume with his x-ray vision. When Perry attempts to expose Clark to Kryptonite when he calls Clark, Lois and Jimmy into the office, Clark's hypnotic suggestion prevents him from showing pain.

Going to his Fortress of Solitude as Superman, Clark puts on his lead Kryptonite-proof armor and waits for Masterman to track him down. Armed with a sword and spear made out of Kryptonite, Superman battles Masterman, ultimately disarming him, however his lead suit is destroyed, and the Bottle City of Kandor is seemingly destroyed. Before the fight can continue any further, Supergirl arrives with a chunk of White Kryptonite. The Kryptonites power to kill plant life causes the spores of Xasnu inside Perry to die, ending the creatures control over the newspaper editor. Going to Perry's home, Superman destroys the rest of Xasnu. When Perry revives he has no memory past the point when Xasnu took over his body.

Back at his Fortress of Solitude, Superman finds Supergirl saddened by Kandor's apparent destruction, however Superman reveals that the Bottle City that she saw destroyed was really a decoy and the real thing is still safe and sound in a secret hiding place.

Appearing in "The Unknown Supergirl!"Edit

Synopsis for "The Unknown Supergirl!"Edit

After repairing the damage an overnight windstorm did to the Midvale Orphanage carnival, Supergirl gets a visit from Krypto, that gives her a note telling her to come see Superman. Visiting her cousin, she finds out that he's decided it's time that the public learn of her existence. He tells her that he plans on doing so once he and Krypto return from a mission in another dimension, leaving Earth in Supergirl's protection.

To compound the fact that she still has to keep her identity secret, a cloud of Kryptonite dust has ringed itself all over the Earth. Seeing protection from it, Supergirl dives into the ocean and seeks refuge in Atlantis where she is reunited with Jerro and Lori Lemaris. With the news of the Kryptonite cloud reaching the news, criminals all over the world take this as a chance to exploit the fact that Superman cannot stop them. Supergirl, watching from afar with her x-ray vision, uses her super powers to stop all the crimes on land without leaving the ocean.

After a number of successes, the Kryptonite cloud dissipates and Supergirl can return to Earth. She arrives just as Superman is returning from his mission. Tragedy would strike when just before Superman decides to go public with the identity of Supergirl, her powers suddenly failed. Without any super-powers, Superman decides against revealing to her to the public for her own safety. The devastated Supergirl returns to Midvale Orphanage as Linda Lee, wondering what happened to her powers.

Retrieved from "https://heykidscomics.fandom.com/wiki/Action_Comics_Vol_1_278?oldid=1395777"
Community content is available under CC-BY-SA unless otherwise noted.