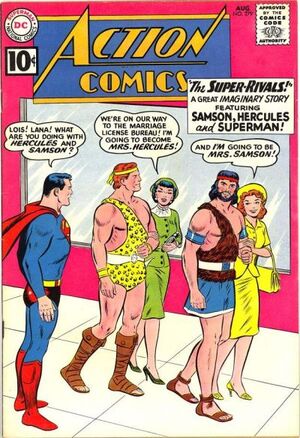 This is an imaginary tale...

Lois Lane and Lana Lang are out seeing the Hall of Heroes in Metropolis. As usual the two women begin talking about their failed attempts to get Superman to marry one or the other. Looking at the statues, the two women marvel about how they wouldn't have to wait around for Superman if heroes such as Hercules and Samson existed in their own time. Little do they know that Superman has been watching them with his x-ray vision and has decided to grant the women their wishes so that they can have some sort of happiness.

Traveling through the time barrier, Superman travels to ancient Greece where he happens upon Hercules in a tug of war in an arena. Because Hercules has no memory of their previous encounter, the legendary strong man is surprised when Superman arrives and snatches him out of his own time. He then travels to the era of Samson and brings him to the present as well. Using a device to teach them how to speak English. The Man of Steel tells the two strong men of the past why he has brought them to the future, and the two agree to be matched up with prospective wives.

Introducing the two men to Lois and Lana finds the women complete cowed by the strong men's super-feats and the quartet agree to marry each other, Lois agreeing to marry Hercules while Lana picks Samson. The two couples thank Superman for his match making and quickly go to the Justice of the Peace to get legally married, and the two men are quickly gainfully employed in commercials and movie deals.

However, Hercules and Samson realize that married life to Lois and Lana is not all it's cracked up to be. Hercules spends his first day as a married man moving the home he and Lois purchased to a spot that Lois finds ideal, an effort that takes all day. Meanwhile, Lana has Samson toil over the property to try and make their home as private as possible, then later go and bring home a mountain lion as a pet. Lana finds that her outlandish request is more trouble then it's worth when the mountain lion runs off with their dinner.

Hearing of Lana's attempt to get an ideal pet, she wakes Hercules to go get a pet for their home as well. Hercules goes out to the local zoo and steals an ostrich. So pleased is Lois that she feeds the bird her pictures of Superman. However, when Hercules and Lois learn on the radio that ostriches require a warm place to sleep at night, Lois forces Hercules to sleep outdoors for the night.

The next day does not prove to be any better for the two men, as they are forced to go out shopping, and Lana crashes her car. This forces the two men to take on additional employment. Samson works on a demolition crew, which causes a dangerous situation necessitating Superman to go into action to prevent harm, which gets Samson fired. Hercules fares no better when he attempts to join the Metropolis football team, and injures everyone including the team mascot. When Samson practices chewing gum with Lana for his upcoming film role, Lana's bubble accidentally bursts and gets caught in his hair. Lana then quickly cuts Samson's hair, unaware that his hair length effects his strength. Furious with Lana, Samson goes out seeking Superman.

Samson runs into Hercules, who is just as fed up with Lois Lane, and the two confront Superman and beg him to return them to the past. Superman agrees and returns the two back to their respective times. Returning to the present, Superman finds that Lois and Lana have sold their houses to settle their debts and have gone back to fighting over him once more.

Supergirl has lost her powers, and unknown to her it's all thanks to Lesla-Lar. Lesla-Lar is a girl who lives in the bottle city of Kandor, a super-genius, she had grown to hate Supergirl and so built a device that would nullify her powers. Having done this, she begins scheming the next part of her plan.

Meanwhile, at Midvale Orphanage, now without her super-powers, Linda Lee is allowed to get adopted and is adopted by Fred and Edna Danvers.

That night, Linda is visited by her cousin Superman who builds her a special room to hide her Supergirl costume, even though she has no powers to use. That night while asleep, Linda is transported and shrunken in size by Lesla-Lar, who uses her devices to transfer Supergirl's powers to her and takes Linda's place on Earth. While Lesla is posing as Linda on Earth, the real Linda is mentally conditioned to believe that she is Lesla-Lar and covers for the real Lesla-Lar's absence.

Meanwhile back on Earth, using her new super-powers, Lesla-Lar steals secrets from Fred Danvers, and springs Lex Luthor from jail, leaving a dummy in his place to cover for him. The two conspire to commit robberies together before she returns Luthor back to his cell to avoid detection. When "Lesla-Lar" monitors Earth and learns of the evil Supergirl she tries to warn the people of Kandor. However, the real Lesla-Lar picks up on this and uses her fail-safe to return Supergirl back to Earth and into her bed, and switch places back. Supergirl wakes up screaming, and dismisses the whole episode as a nightmare.

Retrieved from "https://heykidscomics.fandom.com/wiki/Action_Comics_Vol_1_279?oldid=1395778"
Community content is available under CC-BY-SA unless otherwise noted.