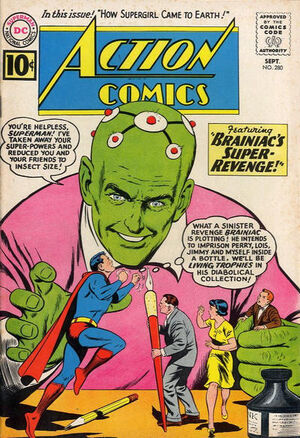 Since his last defeat at the hands of Superman, Brainiac has been trapped in suspended animation in Earth's distant past. However as the age of dinosaurs comes to an end and man rises into predominance, Brainiac is revived when cavemen invent the wheel. The first wheel rolls away and smashes into Brainiac's ship cracking it's dome and releasing the gas that has kept him in suspended animation for millions of years. Revived, Brainiac returns to the present and decides to get revenge against Superman. Seeking an ally, Brainiac beams out a message to criminals that have been imprisoned in the intergalactic prison. Unable to find a suitable protege to help him, Brainiac decides to get revenge against Superman on his own.

In Metropolis, Perry White assigned Clark Kent, Lois Lane, and Jimmy Olsen to go to the African Congo to follow reports of a native uprising in the area. Clark manages to wiggle out of going so that he can accompany his friends as Superman. When plane troubles prevent their timely departure, the three reporters and their plane are carried to the Congo by Superman who gets there in record time. When they arrive they spot an explorer watching a herd of gorillas and find his lack of concern about being in their proximity perplexing.

After the group sets up camp they are attacked by Brainiac who uses a special Kryptonite dust solution to weaken Superman. With the Man of Steel immobilized and made vulnerable, Brainiac then uses a shrink ray to shrink Superman, Jimmy, Lois and Perry down to miniature size. Fleeing from Brainiac, the group hides out near a tree when they are approached by a gorilla. Before they can figure out what the Gorilla's intentions are, Brainiac traps them all (including the gorilla) in a gigantic glass bottle which is shrunk down to size.

While Brainiac is distracted by the same explorer, who is now making strange noises, the others are surprised to find that the ape has human-like intelligence and climbs the tree inside the bottle and removes it's cork. Then using a rope that was with them when they were shrunk down to size, helps Superman, Lois, Jimmy and Perry out of the battle trap. Getting to Brainiac's ship, they are all restored to their normal size and Superman's powers return to him. Superman and the ape then track down Brainiac. Superman easily knocks out Brainiac and the secret of the ape that acts like man and the man who acts like an ape is revealed: They had just been rescued by Congo Bill.

Switching his mind back to his own body, Congo Bill tells Superman he secretly noticed Brainiac's arrival and decided to help Superman out by switching his mind with the Congorilla. With Brainiac defeated, Superman turns him over to the intergalatic police. In a twist of irony, Brainiac sends out his thoughts to criminals appealing to them to free him, and is refused rescue on the fact that he is a has-been.

Appearing in "Trapped in Kandor!"Edit

Synopsis for "Trapped in Kandor!"Edit

Linda Lee begins her daily routine, and is almost late for class, and begins to realize that she took her lost super-powers for granted. That day, her class goes on a field trip to the Daily Planet in Metropolis. There Clark Kent tells Linda that he's going to make one final attempt to come up with a way to restore her powers. Watching this from her monitor on Kandor, Lesla-Lar comes up with an idea to trick Superman to further her own criminal goals.

That night, Lesla-Lar uses her devices to swap places with Linda Lee as she sleeps, so that she can operate on Earth under the guise of Linda Lee/Supergirl, while the real Supergirl is mentally conditioned to think she is Lesla-Lar. She meets up with her partner, Lex Luther in his prison cell and tell him that she wants him to build a Kryptonite ray to destroy Superman, seeing how to do so herself would kill her. They plot to assassinate Superman when he reveals Supergirl to the world, so that the world figures Supergirl is on the side of the law, while in reality Lesla-Lar is working with Luthor.

While in the city of Kandor, "Lesla-Lar" goes about her daily tasks and becomes interested in Supergirl's exploits. She begins watching video presentations of Supergirl completely unaware that she is watching her own history. While on Earth, the real Lesla-Lar, still posing as Linda Lee meets with Superman. Superman tells "Linda" that he cannot restore her powers, however Lesla-Lar tricks Superman into thinking she found an instant cure and restored her powers from breathing the vapors of a melted rock. Using her x-ray vision "Linda" spots a canyon that is being effected by an Earthquake. Superman rushes to the rescue, and "Supergirl" secretly reshapes the rocks Superman is knocking aside into a unique stone formation across a road. Later while congratulating her for her help, Superman reveals to "Supergirl" that he is convinced her powers have returned in full and she has not lost any skill and decides that they should reveal her to the public right away. This plays right into Lesla-Lar's plans.

Retrieved from "https://heykidscomics.fandom.com/wiki/Action_Comics_Vol_1_280?oldid=1395779"
Community content is available under CC-BY-SA unless otherwise noted.