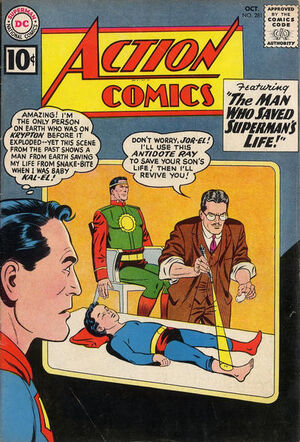 Superman seems stymied by Paul Pratt, a thief who appears capable of being in two places at once. But he is contacted by Prof. Amos Dunn, who tells him an incredible story: years ago, before Krypton’s destruction, he received radio transmissions from Jor-El, instructing him to construct a matter transmitter / receiver apparatus on Earth. With a unit on Earth and one on Krypton, humans could be teleported across both planets, and Jor-El hoped to use this device on a mass basis to save the Kryptonian people. Dunn did go to Krypton, where he saved the lives of Jor-El and baby Kal-El after both were attacked by creatures from Jor-El’s aquarium. Superman confirms this by examining the scars on his ankle where the Kryptonian fish-snake bit him. However, on the eve of Krypton’s destruction, the apparatus on Earth malfunctioned and could not enable Jor-El, Lara, or Kal-El to teleport to Earth. Later, Dunn saw Superboy, knew that he was the former baby Kal-El, and resolved to tell him of his encounter with him and Jor-El when the youth was an adult. Now, Dunn confirms that one of his assistants has stolen the transmitter plans and is using it with Pratt to commit robberies via teleportation. Armed with this knowledge, Superman intercepts the two thieves and captures them.

Appearing in "The Secret of the Time-Barrier!"Edit

Synopsis for "The Secret of the Time-Barrier!"Edit

Continued from last issue... Superman is convinced that Supergirl is ready for a public appearance, unaware that "Supergirl" is really Lesla-Lar, rogue Kryptonian from the bottle city of Kandor who has taken the real Supergirl's place. Before doing so, Superman has to check on an experiment in his Fortress of Solitude, and so the duo travel there. Inside, while Superman is busy, Krypto becomes suspicious of "Supergirl" and realizes that she's someone else.

Sensing the real Supergirl's presence Krypto's x-ray vision finds that she's inside the bottle city of Kandor. There, believing she is Lesla-Lar, the real Supergirl has ironically been cased as her self in a Supergirl movie being filmed in Kandor. Utilizing the a change ray in Superman's fortress, he pulls the real Supergirl from Kandor and sends Lesla-Lar back to Kandor. Supergirl returns with no memory of what happened and is still without her super-powers.

When Superman returns from his experiment, he finds a power-less Supergirl with spotty memory. He tries the same "experiment" on her that restored "her" powers (Really a ruse by Lesla-Lar last issue.) Superman then decides to test his next theory and brings Supergirl back in time. His theory proves correct that whatever is effecting her super-powers is only in the present day, because upon arriving in the year 1692, they find that Supergirl's powers have been restored.

Superman decides to leave Supergirl enjoy her powers in this era. She happens upon a superstitious town who's people are going through hard times. As the "Golden Witch", Supergirl uses her super-powers to bring good fortune and aid to the troubled people before returning to her own time. Upon returning to the present, her powers fail again and she is saved by Superman. Superman returns her to her home, and tells Supergirl that he cannot reveal her to the public now that her powers are uncertain, but tells her not to give up hope.

Both are unaware that the whole episode was watched by Lesla-Lar who waits for Supergirl to fall asleep so that she can take her place once more. This story is continued next issue....

Retrieved from "https://heykidscomics.fandom.com/wiki/Action_Comics_Vol_1_281?oldid=1395788"
Community content is available under CC-BY-SA unless otherwise noted.