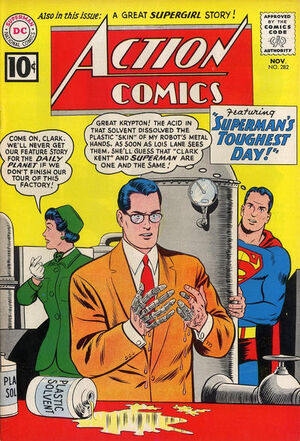 Perry White gives Clark Kent the day off work at the Daily Planet, allowing for Clark to change into Superman and go on patrol. In order to keep a date with Lois Lane to a plastic factory, Superman sends off one of his Clark Kent robots to take his place.

Superman then goes to the Fortress of Solitude to feed the animals in his intergalactic zoo and check on the Bottle City of Kandor. Superman then returns to Metropolis to go on patrol, and while the Man of Steel helps an ice cream truck driver keep his ice cream cold, the Clark Kent robot goes with Lois to the plastic factory. There the robot accidentally places his hands on plastic solvent causing the plastic skin that covers his robot body to melt, revealing his mechanical nature. To cover this up, the Clark robot puts his hands into his pocket while he tries to find a means to avoid exposing his true nature to Lois and the others.

Superman learns of the problem, but cannot get away from his tasks to replace the damaged hands, but trusts that his robot is smart enough to avoid detection. While Superman helps with a delicate brain surgery operation, builds a dinosaur themed playground for school children, helps the mayor of Metropolis (who's infected with Measles) give a speech at City Hall by building a quarantine bubble and stops a runaway test missile, the Clark Kent robot avoids any situation where he has to reveal his hands.

Appearing in "The Supergirl of Tomorrow!"Edit

Synopsis for "The Supergirl of Tomorrow!"Edit

Continued from last issue... Lesla-Lar watches impatiently for Linda Lee to fall asleep so that they can switch places once more. However, Linda, her mind preoccupied about the fact that it's only in the present time that her powers are nullified. Lesla-Lar falls asleep, and wakes up the next day to find that she slept through her window of opportunity to swap places.

After breakfast with her adoptive parents, she is visited by her cousin Superman, who gives her a replica of a time machine commonly used by the Legion of Super-Heroes. She decides to travel into the future and see if she might be able to live a new life there, much to the chagrin of Lesla-Lar who's viewer cannot look at the future. In the future, Supergirl finds that her powers are back and helps that societies Gizmak-Ral and the authorities round up mutated beasts and smash up the All-Seeing-Eye's criminal organization. She also is shown statues commemorating both Superman and Supergirl, the inscription on Supergirl's statue states that she was more powerful than Superman.

In spite of the adventure and the fame, Supergirl realizes that her adopted parents and cousin Superman mean more to her than super-powers and so she returns to her own time, telling Superman of her decision. Resuming her civilian guise, Supergirl happens upon Dick Wilson, and finds that she has a crush on him. That night, she decides to give up her Supergirl identity all together, however just before she can toss her costume down a well she realizes that her powers have mysteriously returned. She rushes to her cousins side to show him, and the two happen upon Kryptonite which effects Superman but not Supergirl. To Superman's surprise, Supergirl proves to be immune to Kryptonite now, which adds an extra dimension to the mystery of Supergirl's returned powers.

Viewing this Lesla-Lar tries to use her device on Supergirl to strip her of her powers and finds that it doesn't work this time. The police on Kandor then burst in, having detected Lesla-Lar's illegal use of Kryptonite rays and arrests her. While Lex Luthor wonders what happened to his Supergirl (when Lar was posing as Supergirl she formed an alliance with him), Superman and Supergirl mull over her restored powers (And Supergirl realizes what the inscription in the future might have meant.) What nobody is aware of is that Supergirl's returned powers came from the mischievous Mr. Mxyzptlk. Mxyzptlk had come up with a plan to humble Superman: Turning a slip of a girl into a being more powerful than he is. Ironically, the girl that he chose was the de-powered Supergirl.

Retrieved from "https://heykidscomics.fandom.com/wiki/Action_Comics_Vol_1_282?oldid=1395781"
Community content is available under CC-BY-SA unless otherwise noted.