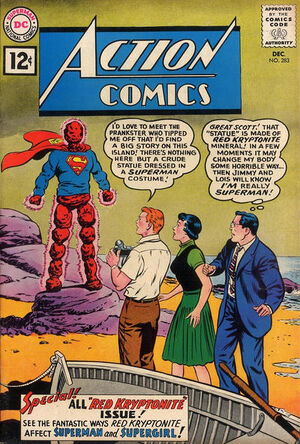 Appearing in "The Red Kryptonite Menace!"Edit

Synopsis for "The Red Kryptonite Menace!"Edit

Jan Dex and Zo-Gar, two criminal chameleon men from the 30th Century, travel back to the modern era in a time bubble and land on a hidden island on Metropolis Bay in order to setup equipment to attract Red and Green Kryptonite from space. Their arrival does not go unnoticed, as their time bubble is picked up by military radar, however they avoid detection by disguising themselves as a tree and a pile of rocks.

Left alone, the two aliens then construct their device to attract chunks of Red and Green Kryptonite to Earth. Once collected they begin setting up a trap for Superman. As Jan Dex collects the Green Kryptonite, Zo-Gar piles the Red Kryptonite into the shape of a humanoid statue and dresses it in a Superman costume to attract the attention of Superman. With their trap set, the two aliens then leave the island with the Green Kryptonite, hoping to get to the mainland and tricking Jimmy Olsen into luring Superman to the island.

At the Daily Planet, Perry White, Clark Kent and Lois Lane wait eagerly to try and learn the location of a meeting between President Kennedy and Premier Khruschev, but to no avail. Jimmy is told that he has a call, answering it, he is told by one of the aliens (posing as a naval officer) that there is an item of interest out on Rock Island. Jimmy asks Clark and Lois to accompany him and they row out to investigate what's to be seen there. They find, much to Clark's horror, that there is a statue made out of Red Kryptonite there waiting for them. Knowing that it will have an effect on him, Clark wishes for a thick fog, and surprisingly one does happen. Using it as an excuse to get Lois and Jimmy to leave, Clark tells them to go back to the mainland and "warn" Superman about the Red Kryptonite while he destroys the statue. Using his super-breath, Clark then blows his two friends out to sea so that they are quickly out of sight allowing for him to change into Superman.

As Superman is attempting to throw away the Red Kryptonite, he wishes Sherlock Holmes existed so that he could help Superman solve the mystery of the Red Kryptonite statue. To his surprise, the legendary detective appears out of nowhere. Superman realizes that the Red Kryptonite has given him the power of mind-over-matter. With the effect of the other two Kryptonite chunks unknown, Superman wishes for his parents to appear and to his surprise both his real parents, Jor-El and Lara, and his adopted parents Jonathan and Martha Kent materialize out of thin air. Once formalities are done, Jor-El attempts to come up with an antidote for Red Kryptonite, however the effects of the first chunk wear off before Jor-El can finish and they all dematerialize.

Returning to Metropolis, Superman does a number of super feats, unaware that the Chameleon Men are watching to see if the Red Kryptonite has any fatal effects on Superman. The effects of the second chunk kick in, causing Superman to have fire breath whenever he opens his mouth. However, as Superman and Clark Kent, the Man of Steel gets around this problem by using his Super Ventriloquism to get around the affliction.

Superman is called into Perry White's office who tells the Man of Steel that he got a call that Kennedy and Khrushchev are meeting in the Fort Dixon bunker and sends Superman to guard them. On his way out, the effects of the third chunk of Kryptonite kick in giving Superman the power of telepathy.

When Superman arrives, he is able to read "Kennedy" and "Khrushchev's" minds and learn that they are really the Chameleon Men trying to lure Superman into being exposed to their Green Kryptonite. With their plot foiled, the two aliens surrender to Superman who whisks them off to the 30th Century for punishment before they can blurt out Superman's secret identity.

Appearing in The Six Red "K" Perils of Supergirl!Edit

Synopsis for The Six Red "K" Perils of Supergirl!Edit

When Mr. Mxyzptlk made Supergirl invulnerable to Kryptonite, he neglected to extend the spell to cover Red Kryptonite as well. As a result, exposure to six Red K meteors turns Supergirl into a fat woman (she mimics being a hot-air balloon), a wolf-girl (she inspires a horror-movie writer to another triumph), and a microbe-sized girl (she fights off disease germs in Dick's foster father's bloodstream and saves his life). Later, Supergirl wonders how the other Red Kryptonite exposures will affect her.

Retrieved from "https://heykidscomics.fandom.com/wiki/Action_Comics_Vol_1_283?oldid=1395782"
Community content is available under CC-BY-SA unless otherwise noted.