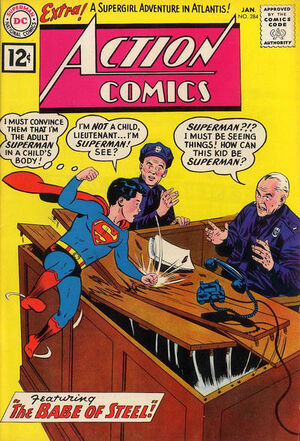 Appearing in "The Babe of Steel!"Edit

Synopsis for "The Babe of Steel!"Edit

Clark Kent has been sent out to do a report on a medium who can contact people from beyond the grave. Secretly using his x-ray vision, he learns that the entire operation is a hoax, and that the "ghostly" hand that appears and writes messages is in reality someone using phosphorescent paint. However, left alone in the mediums room, Superman does get a ghostly message from someone needing his help.

Taking time off from the Daily Planet, Clark goes to his Fortress of Solitude as Superman. There he purposely exposes himself to Red Kryptonite that will change him, physically, into a baby while retaining his intelligence. Going out on patrol, Superman spots a carnival for charity, and notices that it's a fraud and that the games are rigged so that nobody wins. Borrowing some children's clothing, Superman then proceeds to use his super-powers to clean out the fraudulent carnival owners out of all their prizes which he gives away to all the children.

Flying off, Superman thwarts a bank robbery, but has a hard time convincing the police that he's really Superman until he flies away to answer a distress call regarding a sinking naval ship. Superman saves it from sinking into the ocean, and puts on a display of his super-powers to prove that he's really the Man of Steel, but reduced to a young age.

Flying toward his destination, Superman comes across a crazy scientist who thinks Earth is going to explode and is about to send his only son out into space in an experimental rocket. Knowing this to be false, Superman switches places with the child. When the test rocket explodes, Superman appears to show the man that his child is okay and convinces him to return to civilization and get help.

Heeding Mon-El's warning, Superman races back out of the portal, summoning Supergirl and Krypto to meet him at the portals opening. There the trio combine their x-ray vision to seal off the portal thwarting Jax-Ur's plot to return to Earth. With Superman returning to his adult form, Jax-Ur vows to one day to escape the Phantom Zone and get revenge against Superman.

Appearing in "The Strange Bodies of Supergirl!"Edit

Synopsis for "The Strange Bodies of Supergirl!"Edit

Supergirl experiences the last three Red K effects by temporarily growing an extra head (which usually disagrees with her), having an hallucination that she possesses deadly "fatal vision", and gaining the finned, scaly lower body of a mermaid (she visits Atlantis and saves Lenora Lemaris, who also loves Jerro, from the hands of giants trapped in a bog). When the final Red K effect wears off, Supergirl joins Superman and finds that her vulnerability to Kryptonite has returned. Superman informs Supergirl that he learned of Mxyzptlk's involvement and that her normal powers have now returned, since his magic has worn off. He also says that he has decided, at long last, to reveal her existence to the world.

Retrieved from "https://heykidscomics.fandom.com/wiki/Action_Comics_Vol_1_284?oldid=1395783"
Community content is available under CC-BY-SA unless otherwise noted.