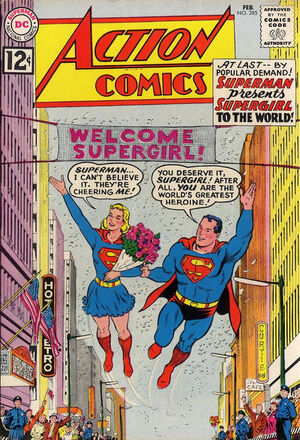 Appearing in "The World's Greatest Heroine!"Edit

Synopsis for "The World's Greatest Heroine!"Edit

Meeting with his cousin Supergirl, Superman tells the Girl of Steel that he has decided that it is now time to reveal her to the public, ending her years of secret training. He tells her they will meet in Metropolis for 9:00 for the big reveal before parting company. Returning to her civilian guise as Linda Lee, Supergirl returns to the home of her adopted parents, the Danvers.

With hours before 9:00, Linda agrees to go with the Danvers to see a movie in Metropolis. However, along the way the bridge they are crossing breaks under the weight of their car, forcing Linda to spring into action and save them without thinking. Realizing that she has revealed her secret identity to her adopted parents before the revelation of her existence, Supergirl's mind is put at ease when Superman arrives and tells her it's okay that her adopted parents know her secret identity. Supergirl and Superman then explain her origins to Fred and Edna Danvers who are proud that their adopted daughter is secretly Supergirl. They then go back to the Danvers home where Supergirl builds a secret tunnel exit out of their house much like what Superman had when he was a boy in Smallville.

That night, broadcasting from the Fortress of Solitude, Superman reveals Supergirl to the world. The revelation sends cheers all over Earth and the universe. After the celebrations are done, Superman heads off on a mission into the 50th Century leaving Supergirl to defend the Earth while he is gone.

Soon, the world is menaced by a creature known as the Infinite Monster, a gigantic creature who is so large, all one can see are it's legs tromping across the land. The creatures rampage sends Supergirl after it, and she soon finds that simple brute force is not going to have an effect on the monster. Thinking fast she constructs a crude missile and with a note inside throws it through the time barrier to the 30th Century. There is is intercepted by the Legion of Super-Heroes who read her note for assistance and send her back a shrinking ray device which she uses to reduce the monster down to a smaller size, allowing her to put the creature in a special bottle prison in the Fortress of Solitude.

With her first public mission a success, Supergirl is once more celebrated by everyone including the President of the United States. When Superman returns to the present he congratulates Supergirl for a job well done and publicly thanks her. As a reward for a job well done, Superman devices her very own room in the Fortress of Solitude.

Retrieved from "https://heykidscomics.fandom.com/wiki/Action_Comics_Vol_1_285?oldid=1395784"
Community content is available under CC-BY-SA unless otherwise noted.