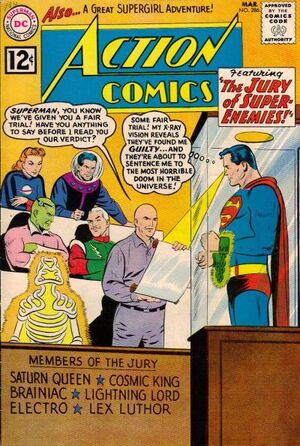 Appearing in "The Jury of Super-Enemies!"Edit

Synopsis for "The Jury of Super-Enemies!"Edit

In a brand new plot to destroy Superman, the Superman Revenge Squad has scoured the universe searching for chunks of Red Kryptonite to use against the Man of Steel. In order to know what effects the Red Kryptonite might have on Superman, the Revenge Squad kidnap Krypto and use various samples on the Dog of Steel. Most samples yield useless results, until they find one that causes the Kryptonian exposed to it to have horrible nightmares about being attacked by their friends in the distant future. Using a dream monitor device, the Revengers see Krypto being terrorized by Streaky and Titano in some future world. Satisfied with the results, and with Supergirl gone with the entire Bottle City of Kandor away on a mission in space, the Superman Revenge Squad head to Earth to use the Red Kryptonite on Supreman.

On Earth, Clark Kent is convinced by Jimmy and Lois to accompany them on a visit to the brand new Superman Museum that has just opened. After their visit the group stops at a diner for lunch, unaware that one of the Superman Revenge Squad is invisibly lacing ketchup with Red Kryptonite. Unaware of this, Clark consumes his meal using the tainted ketchup, ingesting a dose of Red Kryptonite in the process.

Later, as Superman, the Man of Steel takes Jimmy Olsen to his Fortress of Solitude so that the two can spend time together while Superman works on various projects. That night when they go to sleep, Superman has a nightmare about being in a distant future and meeting the descendants of his old Smallville friends: Peter Ross and Lana Lang. The two are not as benevolent as their ancestors however, as they suddenly use a device to turn a bunch of children's balloons into Green Kryptonite that begins to weaken Superman. His fright is so powerful that his sleeping body begins punching around the room, wrecking things until Jimmy wakes Superman out of the dream by turning on his signal watch and running its signal through a sound amplifier. The Revenge Squad has been watching this and gloating that the Red Kryptonite will spell the end of Superman and the Earth.

After Superman recounts his nightmare to Jimmy the two leave the Fortress of Solitude so that Jimmy can make the next meeting of the Jimmy Olsen Fan Club. There as Jimmy addresses his club members, Superman nods off and his dream is once more monitored by the Revenge Squad. In this next dream, Lex Luthor, Brainiac, Electro and the Legion of Super-Villains are attempting to disrupt a presidential race in the 67th Century. When Superman attempts to stop them he is knocked out with Kryptonite rays and taken prisoner. In the villains hideout, he is put on a mock trail and found guilty. His sentence: to fight his cousin Supergirl to the death. Superman and Supergirl are forced to fight each other otherwise the villains will destroy the Earth.

The two are evenly matched however, and eventually Supergirl, unable to bring herself to turn her x-ray vision on her cousin trains it on the villains killing them all except for Lightning Lord. Before Superman can do anything Lightning Lord then banishes Supergirl to the Phantom Zone and detonates the Earth. It's at this point that Superman is roused from his dream by Jimmy once more. As Superman reassures Jimmy that the dreams are harmless, he is unaware that the Superman Revenge Squad are in deep space, mocking him, as the Man of Steel's nightmare is delivering their revenge.

Appearing in "The Death of Luthor!"Edit

Synopsis for "The Death of Luthor!"Edit

Lex Luthor breaks jail again and reunites with his gang. His objective: prove that Supergirl is a hoax, and / or destroy her. He succeeds in endangering her with Kryptonite, but, when she escapes that hazard and pursues him, Luthor accidentally kills himself with a ray-gun of his own creation. Though the police on hand believe Luthor has finally gotten his just deserts, Supergirl thinks that he should not escape his life sentence this way. She scours Atlantis and several alien worlds to find material for a cocoon which, applied just in time, restores Luthor to life. Luthor proves to be less than grateful, especially when they haul him off to jail again.

Retrieved from "https://heykidscomics.fandom.com/wiki/Action_Comics_Vol_1_286?oldid=1483069"
Community content is available under CC-BY-SA unless otherwise noted.