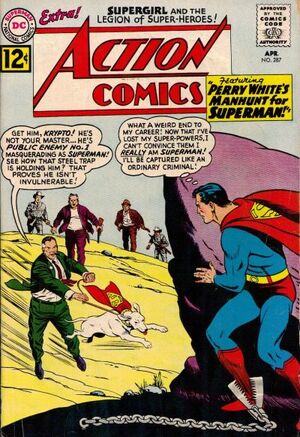 Pardon the telepathic interruption, but... please give me some milk!

After having been secretly exposed to Red Kryptonite by the Superman Revenge Squad, the Man of Steel has been plagued by nightmares about the future. After his recent nightmare after nodding off at the latest meeting of the Jimmy Olsen Fan Club, Superman realizes that he's been exposed to Red Kryptonite, but assures Jimmy that the dreams are harmless and that the effects of the Red Kryptonite will wear off. As Superman flies off, he is completely unaware of the Revenge Squad's plan to destroy the Earth.

As the Man of Steel flies through the city, he suddenly passes out and goes into another dream. Set a few months in the future, in this dream Superman is put under the hypnotic control of a super-criminal and forced to commit crimes, break crooks out of jail and rob Fort Knox. Due to his forced villainy, the Man of Steel becomes a wanted man and a manhunt is enacted to capture him. To Superman's misery, he's attacked by Perry White, which is leading a group of men to capture him, and is carried off by his own dog Krypto.

Superman is awoken from his dream by Jimmy in the Flying Newsroom who has called Krypto in to help wake up Superman. Believing that by launching an attack on Earth at this point the Man of Steel will discount it only as a Red Kryptonite dream. Sure enough when they launch an invasion of robots programmed to contaminate the Earth's soil, Superman discredits it as a dream at first until he realizes he's been duped. The Man of Steel then quickly destroys the Revenge Squad's legion robot invaders and uses the Matter-Eater from his Intergalactic Zoo to eat the soil that the robots have contaminated. With their plot foiled, the Superman Revenge Squad retreats vowing to get revenge against Superman some other time.

Later as he's relating the story to Jimmy, Lois and Perry, he tells them he realized that it wasn't a dream because he felt no tingling sensation when the attacked happened, nor was he attacked or forced to fight his friends like in all the dreams that he had.

After spending time at her friend Margie's house where her Superman fan-club has Lois Lane over as a guest visitor, Supergirl (as Linda Lee) returns home. There she is told by Fred Danvers that the sheriff is about to blow up the tree stump which hides the secret exit to their home which Supergirl uses to leave unseen. Supergirl rushes off to prevent the entrance from being seen. Returning home once more she gets a signal from the Legion of Super-Heroes to visit them in the 21st Century.

At first she wonders why the Legion called her because they all appear to be busy doing other things, however she strangely finds them at the Legion's headquarters. The Legion quickly have her board their ship to go out into space to stop the Positive Man. Supergirl succeeds in doing so by attracting a negative creature from space to cause the two to explode.

Returning to Earth, the Legion members find that their super-powers no longer work, and in order to avoid a crime spree, Supergirl with the help of Whizzy (the future descendant of her super-cat Streaky) help make it appear as though the Legion still has their super-powers by helping them out behind the scenes.

However, this is all a trick, and the "Legion" members are really members of the Chameleon men, alien shape changers who are posing as the Legion. With Supergirl's guard down, they use a Phantom Zone projector to shunt both Supergirl and Whizzy into the Phantom Zone. Using Whizzy's telepathic abilities, they gain the aid of the owner of an android factory they had saved earlier to send in an android resembling the Chameleon Men to enter the Legion base and free Supergirl and Whizzy.

Supergirl then quickly defeats the Chameleon Men, trapping them in a transparent dome, and freeing the other Legion members. After she says goodbye to the Legion and Whizzy and returns to her own time and relates to the story to Streaky.

Retrieved from "https://heykidscomics.fandom.com/wiki/Action_Comics_Vol_1_287?oldid=1497776"
Community content is available under CC-BY-SA unless otherwise noted.