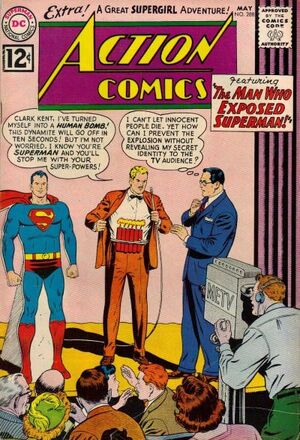 Appearing in "The Man Who Exposed Superman!"Edit

Synopsis for "The Man Who Exposed Superman!"Edit

Embittered criminal Hal Colby has been released from jail following his capture at the hands of Superboy years ago. Wanting revenge he borrows a million dollars from the mob in an attempt to expose Superman's secret identity to the public. With the money he poses as television correspondent named Bert Hutton and launches a television series called "Local Boy Makes Good" and announces to the media that his first episode will focus on Superboy and will begin a series of interviews on Smallville. When word reaches the Daily Planet, Perry White sends Clark Kent out to cover the story for the paper.

Clark changes into Superman and pays a visit to his old hometown, making a stop at the Smallville orphanage to reminisces about how he was left there by the Kent family so that they could legally adopt him later. There he meets with "Bert Hutton" who confronts the Man of Steel to see if Superman recognizes him after all the passing years. When he doesn't, he tells Superman that he's going to Smallville High and Superman tags along with him.

There, "Hutton" interviews Mr. Norsted, one of the teachers, who relates to a story about how his class were out sailing a recreated Viking warship when they were hit by a violent storm and rescued by Superboy. Colby begins to suspect that Clark Kent was really Superboy when he takes note of the fact that Clark Kent disappeared just moments before Superboy made an appearance. Next when he interviews Lana Lang, Lang relates to a story where Superboy drilled for oil in front of her class. The story ends with Lana almost catching on that Clark Kent was really Superboy, however unknown to her Clark had pulled a hoax to protect his identity. This makes Colby even more suspicious of the Clark Kent/Superman connection.

Left to his own devices, Colby researches the adoption records at the Smallville orphanage and sees that Clark Kent was adopted there, remember Superman visiting the orphanage cements the connection in Colby's mind. He then searches the Kent household and finds the tunnel Superboy used to come and go from the property and a trunk full of mementos of Superman's childhood. Witnessing this as he flies by, Superman digs under the Earth and quickly pulls out all the times out of the bottom of the trunk, making it appear as though it's empty.

Changing into Clark Kent, Superman meets with "Hutton" and is asked to appear at the studio live and on camera. There, among his friends at the Daily Planet and Lana Lang, Clark is pressured to reveal his true identity by Colby who reveals that he's strapped with dynamite that is set to go off in seconds. Clark toughs it out, and soon finds that it was a bluff, that the dynamite is fake, and then sucker punches Colby without having to reveal his identity. When Colby calls Clark on the tunnel in the Kent house, they go back and witness as Krypto the Super-Dog digs tunnels to unearth gigantic bones that he has buried. This is all a cover orchestrated by Superman to make it appear that Krypto is the creator of the tunnels, thus protecting his secret identity.

Appearing in "The Man Who Made Supergirl Cry!"Edit

Synopsis for "The Man Who Made Supergirl Cry!"Edit

Fred Danvers, who possesses unexpected extra-sensory powers, is telepathically influenced by inmates of the Phantom Zone to perform cruel actions that make Supergirl cry, and then to save her tears. The Zoners then induce Danvers to mix the super-tears with other chemicals to form a substance that opens a rift between the Phantom Zone and the Earth's dimension. Only one can emerge at a time, however, and Mon-El is forced out first, followed by Jax-Ur, who hits Fred Danvers to force more tears from Supergirl. Mon-El returns, however, with a green Kryptonite meteor which he uses to force Jax-Ur back into the Zone. He leaps into the Zone himself just before the rift closes up. Later, Fred Danvers discovers that Jax-Ur's blow destroyed his psychic abilities.

Retrieved from "https://heykidscomics.fandom.com/wiki/Action_Comics_Vol_1_288?oldid=1483070"
Community content is available under CC-BY-SA unless otherwise noted.