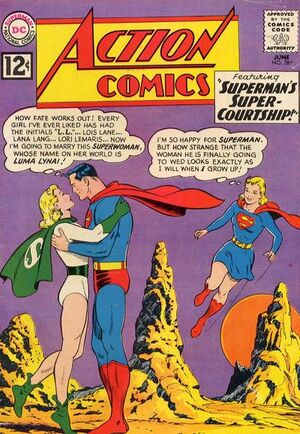 Some day, when you're married, it'll be your wife who will do your housecleaning!

Appearing in "The Super Practical Joker!"Edit

Synopsis for "The Super Practical Joker!"Edit

Mr. Willis, one of the Daily Planet's biggest stockholders has convinced Perry White to hire on his nephew Dexter onto the Planet staff. This proves troublesome as Dexter is a big practical joker who plays jokes on everyone. When he attempts to shave a part of Clark Kent's hair as a joke, the shaver breaks in his hand. While Clark convinces him that his shaver was defective, Lois, having witnessed the spectacle, is once more suspicious of Clark being Superman.

After pulling a stunt on Superman, Dexter is sent out on assignment with Jimmy Olsen to cover the arrival of a shipment of rare animals. With the troublesome Dexter gone, Perry warns Clark that his series of reports about the Avenue Ten gang has prompted the group to mail death threats to Clark at the Planet. Clark dismisses the threats and tells Perry that he will continue his series.

Meanwhile, Jimmy is the butt of another one of Dexter's jokes, when his rigged car gives Jimmy the fright of his life when he thinks nobody is driving, when in reality, Dexter has miniature controls in the back seat and was in full control of the car the whole time. When Jimmy and Dexter hear that a gorilla got loose, Jimmy rushes off to cover the story. Superman meanwhile finds the gorilla on a roof top and captures it. He is then signaled by Jimmy to come to the Cub Reported aid. When Superman arrives he sees that Jimmy has tracked another gorilla, however Superman quickly reveals that it's really Dexter in disguise.

Superman decides that enough is enough and plays a prank on Dexter himself. Secretly, Superman carries Dexter's car to a theme park and then animates all the animals, chasing Dexter into an abandoned part of town ready for demolition. There, Superman shakes down the buildings. When Dexter finds him, Superman expresses an enjoyment for jokes, and laughs so hard that the remainder of the buildings tumble, frightening Dexter so badly that he reforms his prankster ways.

Quickly, Superman changes into Clark Kent and fashions the metal ruins into a special metal wig for later. Arriving back at the Daily Planet, Clark and Dexter are taken at gun point by the Avenue Ten Gang. However, when they handcuff Dexter, he's wearing his joke arm and quickly frees himself and Clark. The two make short work of the gang and after they are turned over to the authorities, Clark reveals the metal wig saying he wore it as protection from the mob. This once more fools Lois into believing that Clark Kent and Superman are not the same man. In the end, Dexter also reforms, promising not to play jokes on people again.

In her guise of Linda Lee, Supergirl watches a sad movie with her adoptive parents the Danvers. Feeling that her cousin Superman may one day miss out on the opportunity of meeting a good wife, Supergirl decides to play cupid to the Man of Steel. Her first attempt is to travel back in time to try and arrange a meeting between Superman and Diana of Troy, however in spite of Superman's super abilities, the people of ancient Greece take to Supergirl more ruining Superman's chances of impressing her.

Returning to 1962, and completely undaunted, Supergirl tries again by convincing Superman to travel to the distant future of the 30th Century to visit their friends the Legion of Super-Heroes. They meet with the now adult Legion members for their Christmas celebrations. However Supergirl's attempts to set Superman up with Phantom Woman and Saturn Woman fail as they are both married to other Legion members.

Returning to their own time, Supergirl decides to use the computers in the Fortress of Solitude to find Superman the perfect mate. She located a super-woman named Luma Lyani from the planet Staryl. However when Superman meets her and brings her back to Earth, their courtship ends quickly when it turns out that Luma's powers are derived from her home planets blue star, and so Superman returns her home. After three attempts, Superman suggests that maybe fate doesn't want Superman to get married right now.

Supergirl decides to give up, and leave Superman's love life to the whims of fate.

Retrieved from "https://heykidscomics.fandom.com/wiki/Action_Comics_Vol_1_289?oldid=1503691"
Community content is available under CC-BY-SA unless otherwise noted.