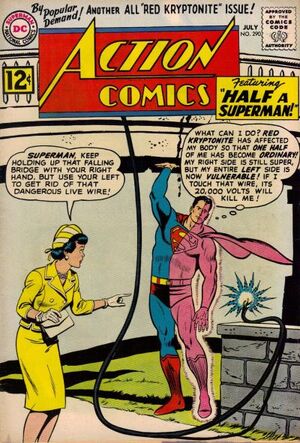 Appearing in "Half A Superman!"Edit

Synopsis for "Half A Superman!"Edit

When opening the supply closet at the Daily Planet, Lois is shocked to find Clark Kent inside putting on a Superman costume. Calling him out as Superman, Lois gets nothing but laughs from Perry and Jimmy who explain that Clark is acting as a body double for Superman who was too busy to appear for a photo shoot for a charity fund.

Later, when Clark really changes into Superman, he becomes concerned about Supergirl's mission in space that required Krypto to return back and report in, Superman flies off into space to investigate. He does come across Krypto in deep space, just as a comet containing Red Kryptonite passes them. This exposure causes half of their bodies to lose their super-powers. Ordering Krypto to stay hidden so that nobody exploits his weakness, Superman flies off to deal with his daily tasks.

Returning to his guise of Clark Kent, he learns that Lois is still suspicious that Clark is really Superman and has planned a round-the-clock report on Superman's activities. When Lois once more presses Clark to admit that he's really Superman and that he won't be able to be in two places at once, Clark shows her a wound on his neck and goes home sick.

As Superman, Clark attempts to keep the fact that half of his body is devoid of super-powers a secret, however with each task he fails to shake Lois' suspicion as she begins to notice evidence that half of his body is vulnerable. After a number of super-feats, Superman has to call in Krypto to help stop a geyser. Lois' suspicions become more solid when a stray dog bites the vulnerable part of Krypto causing the dog to flee, Superman quickly departs before he can provide and explanation.

Later, back in his guise of Clark Kent, Superman allows Lois to "secretly" cut the hair on his vulnerable side. Next, creating a false mask and pretending to sleep, Clark allows Lois to snip the hair on the other side of his head. As it is a wig, Lois is convinced that Clark is not Superman. Later, she is reaffirmed of this when she sees Superman later and notices that there is no wound on his neck.

Retrieved from "https://heykidscomics.fandom.com/wiki/Action_Comics_Vol_1_290?oldid=1483072"
Community content is available under CC-BY-SA unless otherwise noted.