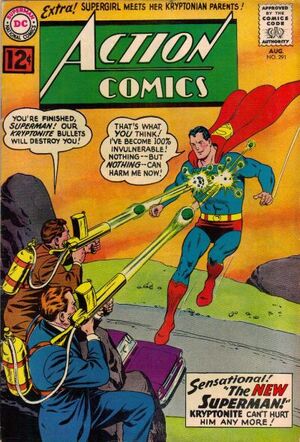 Appearing in "The New Superman!"Edit

Synopsis for "The New Superman!"Edit

Clark Kent is covering a story on the death of "Hank the Hustler" and is given by the police the possessions that he always carried in order to be photographed for the story: A diamond money clip, a gold luck charm, and a counterfeit silver police badge. When a call comes in reporting that Professor Benet's lab has been robbed by Dude Dunn and his gang, Clark accompanies the police to the location.

There he finds that Lois Lane has beat him to the location and learns that the crooks stole a cache of Green Kryptonite that Benet was experimenting on. To Clark's surprise, when Lois pulls out a chunk of Kryptonite that was not stolen he is not effected by it. Wondering if he's somehow become immune to Kryptonite, Superman puts it to the test by going out into the ocean and getting into close proximity with a chunk of Kryptonite that has been disposed of there. To his surprise he has been rendered immune to the once lethal substance. Deciding to check Dunn's home for the stolen Kryptonite, Superman finds that his x-ray vision can now peer through lead and that his strength has increased, but finds none of the stolen Kryptonite.

Superman tracks Dunn and his gang to a cave where they are waiting for the Man of Steel with weapons designed by Luthor that allows them to fire the stolen Kryptonite. They are shocked to find that their weapon against Superman is now worthless and Superman easily rounds them up. However, something in the cave causes Superman to weaken and the crooks mmanage to escape.

Returning to the Daily Planet to follow up and learns that Dunn's gang was captured by the police. When Lois opens a package sent to her by a visiting Maharajah, she finds a diamond ring inside, and Superman finally finds himself weakened by it as though it were Kryptonite. Superman has her throw it away when he tells her that it's really glass. Wondering if his weakness to Kryptonite has been transferred to diamonds, Superman returns to his Fortress of Solitude to find that he has once more been weakened by some substance. Brought inside by the Superman Emergency Squad, Superman now finds that his weakness has been transferred over to gold, and has to seal off all the gold objects in his Fortress.

Without a solution to the situation, Superman returns to his identity of Clark Kent and covers a story about a gambling yacht that is open for charity. When Clark suddenly scores a jackpot on the slots, the silver coins begin to weaken him. Having someone turn over the silver coins to charity, Clark realizes what has happened: That he was somehow exposed to Red Kryptonite, transferring his weakness to Kryptonite temporarily to the objects that he had in his pockets.

Leaving the yacht and resuming his identity of Superman, the Man of Steel agrees to ride in an experimental rocket. Inside, he is suddenly struck weak and realizes that the silver plated police badge was primarily made out of aluminum. Since the rocket is constructed out of the same material it is now weakening him and threatening to kill him. With the last of his strength, Superman manages to operate the rockets controls to make it speed up so fast it breaks through the time barrier and lands on prehistoric Earth. As he calculated, the Kryptonian flame dragon he stranded there uses its flame breath on the ship melting it open so that Superman can escape.

A safe distance from the rocket, the effects of the Red Kryptonite finally wear off and Superman returns to the present, thankful that his weakness is to Kryptonite and not a more common substance.

Appearing in "The Bride of Mr. Mxyzptlk!"Edit

Synopsis for "The Bride of Mr. Mxyzptlk!"Edit

Mr. Mxyzptlk plagues Earth with pranks again, such as turning the entire United Nations delegation into Bizarros, and Supergirl is unable to make him say his name backwards. When she denounces him as, among other things, "the greatest creep there ever was!", Mxyzptlk thinks that she is beautiful when she's angry, and proposes marriage to her. She gives him an unequivocal "No!", but Mxyzptlk proves his love by materializing her dead parents, Zor-El and Allura. Supergirl is overwhelmed, and is torn between affection for her natural parents and the Danverses. Zor-El, for his part, insists that Supergirl marry Mxyzptlk. But, before the wedding can take place, he has Mxyzptlk drink a toast laced with Krypton Truth Serum. Thus, when Zor-El directs him to, he has to say his name backwards, and returns to the 5th Dimension. All his magical effects are canceled, including the existences of Zor-El and Allura. Later, Supergirl wonders if she will ever see her real parents again.

Retrieved from "https://heykidscomics.fandom.com/wiki/Action_Comics_Vol_1_291?oldid=1483073"
Community content is available under CC-BY-SA unless otherwise noted.