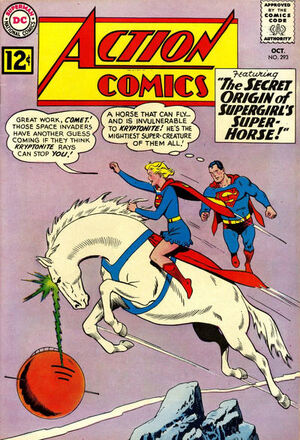 Appearing in "The Feud Between Superman and Clark Kent!"Edit

Synopsis for "The Feud Between Superman and Clark Kent!"Edit

Red Kryptonite splits the Man of Steel into two beings--an arrogant Superman and a non-powered Clark Kent -- and, if 72 hours passes without them merging, they will stay apart forever.

Appearing in "The Secret Origin of Supergirl's Super-Horse!"Edit

Synopsis for "The Secret Origin of Supergirl's Super-Horse!"Edit

Supergirl learns that Comet has telepathic powers, by which he tells her of his origin. He was once Biron the Centaur in ancient Greece, and saved the sorceress Circe from an enemy sorcerer, Malador. For this she gave him a potion intended to give him full humanity, but Malador switched her potions and caused Biron to become all-horse instead. To make up for her mistake, Circe fed Biron (now Comet) another potion which gave him the speed, invulnerability, strength, immortality and telepathic power of the Greek gods. But, to complete his revenge, Malador and his mentor cast a spell to exile Comet to the constellation Sagittarius forever. The rocket that sent Supergirl to Earth passed near the asteroid where Comet was imprisoned, shattered its force-field with repeller rays, and freed Comet. Later, after performing rodeo stunts with Linda Danvers, Comet helps Supergirl and Superman overcome alien invaders. Back at the ranch, Linda discovers that Comet has been sold to an animal trainer from Hollywood who intends to make him a sensation in Westerns.

Retrieved from "https://heykidscomics.fandom.com/wiki/Action_Comics_Vol_1_293?oldid=1483075"
Community content is available under CC-BY-SA unless otherwise noted.