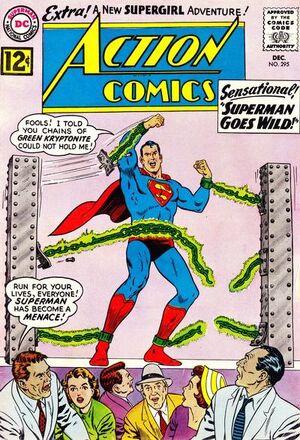 Two members of the Superman Revenge Squad turn Superman into an on-again-off-again menace with a hypnotic ray, but the Man of Steel outfoxes them with a ruse, and the Squad members kill themselves rather than be captured.

Appearing in "The Girl With the X-Ray Mind!"Edit

Synopsis for "The Girl With the X-Ray Mind!"Edit

Linda Danvers's friend Lena Thorul has ESP powers and wants to join the FBI, but she has no verifiable past and cannot be accepted. Supergirl investigates and finds the reason why: Lena is really the younger sister of Lex Luthor, and gained ESP powers through contact with a "space-brain" brought to Earth by Superboy. Lena and her parents were forced to move from Smallville and change their last names to Thorul, though Lena never learned of her brother's criminal past and was told he died in an accident, not long before her parents died in a very real accident. When the FBI learns the truth, they are adamant about not hiring her. Lena, however, pretends to infiltrate Bank Busters, a gang of bank robbers, and to use her powers in their behalf. When Luthor hears of it, he tells all to Supergirl and pleads with her to keep Lena from a life of crime. However, Lena was only playing along with the crooks to catch them in the act, and helps Supergirl and the police capture the Bank Busters. Supergirl promises to tell the FBI about the case, in hopes that they will reconsider hiring her. But she gets nerved when Lena admits that she has Supergirl telepathically linked with Linda Lee Danvers.

Retrieved from "https://heykidscomics.fandom.com/wiki/Action_Comics_Vol_1_295?oldid=1483077"
Community content is available under CC-BY-SA unless otherwise noted.