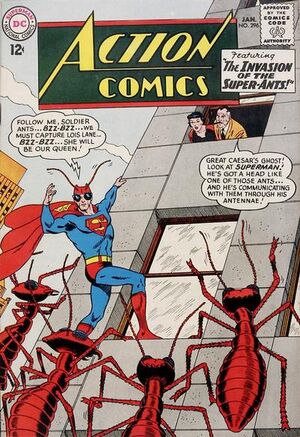 Appearing in "The Invasion of the Super-Ants!"Edit

Synopsis for "The Invasion of the Super-Ants!"Edit

A colony of giant ants, mutated by a nuclear war on another planet, comes to Earth with a warning, and Superman uses Red Kryptonite radiation to give himself an ant’s head in order to communicate with them.

Appearing in "The Girl Who Was Supergirl's Double!"Edit

Synopsis for "The Girl Who Was Supergirl's Double!"Edit

When Lena Thorul attends a costume ball dressed as Supergirl, a soiree also attended by Dick Malverne and Linda Lee Danvers, Dick is convinced by Lena's resemblance to the Girl of Steel and by the real Supergirl's appearance when thieves attempt a jewel robbery there, that Lena is really Supergirl. Other circumstantial evidence later on hardens Dick's mistaken belief. Linda becomes jealous when Dick's affections are turned to Lena. Lex Luthor, in the meantime, asks Supergirl to give Lena some diamonds he created from coal lumps, as a secret birthday gift. When Dick sees one of the diamonds fallen into the coal scuttle at Lena's house, he is finally convinced beyond any doubt that Lena is Supergirl. Lena finally "admits" that she is the Princess of Power, and the real Supergirl, listening in with super-hearing, wonders why Lena has told a lie.

Retrieved from "https://heykidscomics.fandom.com/wiki/Action_Comics_Vol_1_296?oldid=1483078"
Community content is available under CC-BY-SA unless otherwise noted.