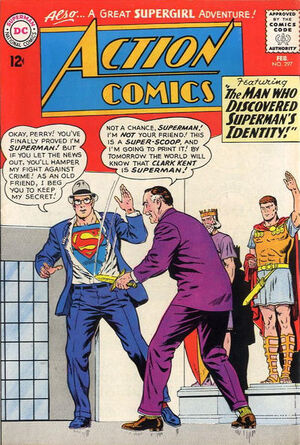 Appearing in "The Man Who Betrayed Superman's Identity!"Edit

Synopsis for "The Man Who Betrayed Superman's Identity!"Edit

When Perry White gets a case of amnesia, a crook convinces him to try and discover the secret identity of Superman.

Appearing in "The Forbidden Weapons of Krypton!"Edit

Synopsis for "The Forbidden Weapons of Krypton!"Edit

Lena Thorul actually told Dick Malverne that she had super-powers because her mind was controlled by a device operated by Lesla-Lar, who has recently broken jail in Kandor. Using her teleport ray, Lesla exchanges places with Lena, and imitates her, convincing Supergirl that a special serum has given her super-powers. Later, Lesla-Lar uses a Phantom Zone Projector to free Jax-Ur, Kru-El, and General Zod from the Zone. The threesome arm themselves with a cache of forbidden Kryptonian weapons, and repay her by destroying her with a disintegrator gun. Since Superman is in another time-era on a mission, the three villains set up a force-field that blocks time-travel, and the people of Kandor are made prisoners of their bottle. Both Supergirl and the villains are stalemated when they try to use their powers on each other, but the weapons give the villains the edge. Supergirl is infected with a disease that turns living creatures into plants. But, when Supergirl tells Lex Luthor that Lena is prisoner in Kandor, he agrees to help her battle the three Kryptonians.

Retrieved from "https://heykidscomics.fandom.com/wiki/Action_Comics_Vol_1_297?oldid=1483085"
Community content is available under CC-BY-SA unless otherwise noted.