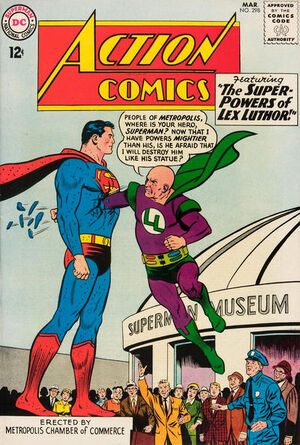 Clark Kent, Lois Lane, and Jimmy Olsen are blown in a balloon gondola into the remote kingdom of Mistri-Lor, where Queen Lura falls in love with Clark and wishes to marry him.

Appearing in "The Super-Powers of Lex Luthor!"Edit

Synopsis for "The Super-Powers of Lex Luthor!"Edit

The warden of Metropolis prison refuses to believe Lex Luthor when he says that Supergirl wants him as an ally, so Luthor throws in with the Phantom Zone villains. Kru-El gives Luthor super-powers with a ray device, and, later, demonstrates a mind-over-matter helmet to him. The Zoners, in a private conversation, plan to use Luthor to construct a magnet that will attract Gold Kryptonite to permanently remove Superman's and Supergirl's powers, but they also intend to strip away Luthor's new super-powers as well when they have it. Unknown to them, however, Luthor is listening with his super-hearing, and, once Kru-El drops the force-field so as to lure Superman into their trap, he switches sides again by using a fake Gold K meteor. Supergirl, Superman, and Luthor triumph, send the Kryptonian villains back to the Phantom Zone, destroy the weapons (and thus remove Luthor's powers and Supergirl's plant scourge), release Lena Thorul from Kandor, and return Luthor to prison.

Retrieved from "https://heykidscomics.fandom.com/wiki/Action_Comics_Vol_1_298?oldid=1396041"
Community content is available under CC-BY-SA unless otherwise noted.