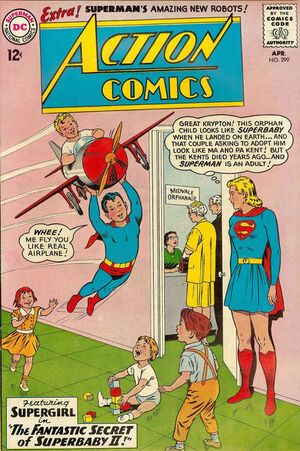 Appearing in "The Story of Superman's Experimental Robots!"Edit

Synopsis for "The Story of Superman's Experimental Robots!"Edit

At a time in the past, Superman was rewarded with a Superman robot built by the inhabitants of the planet Jax, with a super-computer brain. But alien invaders' rays turned the robot and two other customized Superman robots against the Man of Steel.

Appearing in "The Fantastic Secret of Superbaby II!"Edit

Synopsis for "The Fantastic Secret of Superbaby II!"Edit

When Supergirl rejects two actors, Mar-San and Lira, from appearing as Jor-El and Lara in a Kandorian movie about Superman's life, they enlarge themselves on Earth with child prodigy actor Rax-Rol (who resembles Superbaby), impersonate Ma and Pa Kent, and try to deceive Supergirl into thinking that history is repeating itself. If their hoax succeeds, they intend to reveal themselves to Supergirl, and thus convince her that they should get the movie roles. Supergirl is almost convinced, but when the "Kents" drive on the left hand side of the road, as did drivers on Krypton, she deduces the truth. However, she does recommend the three for the roles of Jor-El and his family, and they get the parts.

Retrieved from "https://heykidscomics.fandom.com/wiki/Action_Comics_Vol_1_299?oldid=1483086"
Community content is available under CC-BY-SA unless otherwise noted.