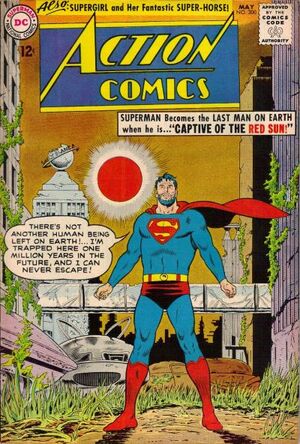 Appearing in "Superman Under the Red Sun!"Edit

Synopsis for "Superman Under the Red Sun!"Edit

The Superman Revenge Squad manages to get Superman to strand himself on Earth in the year 1,000,000 A.D., in which the sun has turned red, removing his powers, and on which he is the last living man on the planet.

Appearing in "The Return of Super-Horse!"Edit

Synopsis for "The Return of Super-Horse!"Edit

The amnesiac Comet runs away from Liz Gaynor's stables, gradually begins using his super-powers again, and eventually ends up with a farmer and his family. When the farmer's young daughter is carried off by an eagle, Comet flies after the bird, attacks it, and rescues the girl. Supergirl, seeing the deed with her telescopic vision, flies to Comet's side, and the sight of his old friend restores Comet's memory. Comet telepathically recounts his origin to the farmer and his daughter, then, after getting a new cape from Supergirl, helps her perform a good deed for Lena Thorul. Finally, Superman summons Super-Horse by radio to the Fortress of Solitude for a special mission, saying the task is too dangerous for Supergirl. Comet flies off to aid Superman.

Retrieved from "https://heykidscomics.fandom.com/wiki/Action_Comics_Vol_1_300?oldid=1396043"
Community content is available under CC-BY-SA unless otherwise noted.