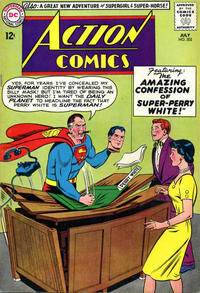 Appearing in "The Amazing Confession of Perry White"Edit

Synopsis for "The Amazing Confession of Perry White"Edit

To save Perry White from a gang of swindlers who seek his life, Superman takes him to the Fortress of Solitude and takes Perry’s place, pretending that Perry White is his secret identity. But when the real Perry escapes from the Fortress and pretends that he has super-powers, things get complicated.

Vostar, an evil Atlantean scientist, plots revenge against Lori Lemaris and Jerro for testifying against him in court, and against Supergirl and Comet for saving Lori and Jerro from one of his traps. Using a telepathic command-helmet, Vostar makes Comet run amok and destroy buildings. Luckily, a passing comet activates the spell that makes Comet a human again, and, imitating a carnival fortune teller, he drops hints that lead Linda Danvers, as Supergirl, to Vostar. Comet returns to his Super-Horse identity, and Supergirl captures Vostar in time to prevent Comet from wrecking the White House.

Retrieved from "https://heykidscomics.fandom.com/wiki/Action_Comics_Vol_1_302?oldid=1483087"
Community content is available under CC-BY-SA unless otherwise noted.