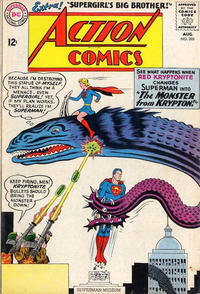 Appearing in "The Monster from Krypton"Edit

Synopsis for "The Monster from Krypton"Edit

On Krypton in decades past, Jor-El and other scientists rocketed the eggs of drangs, fearsome dragon-like monsters, away from their planet to an uninhabited world. However, a drang egg passed through the Red Kryptonite cloud in space and landed on Earth. Even though the egg cracked and cannot hatch, Superman , investigating, becomes a drang when affected by the Red K. Supergirl, Jimmy Olsen, and others believe that Superman has been killed by the drang and attempt to destroy it. All of Superman's attempts to reveal the truth go awry, until he finally rescues Supergirl from a green Kryptonite weapon-burst, pulls up a Superman statue, and scratches out the letters on the base inscription to leave the message: I AM SUPERMAN. The drang-Superman is left unmolested until he can change back to his Superman form when the Red Kryptonite wears off.

The Danvers family is astonished when a man who appears to be their long-lost son Jan appears on their doorstep. They had believed Jan Danvers to have died in the Korean War. Unknown to them, the real Jan is dead, and his double is Biff Rigger, another ex-soldier who met Jan in Korea and learned of the $50,000 inheritance money waiting for Jan when he got home. Supergirl reveals her double identity to Rigger and gives him a pill which imparts temporary super-powers to him before learning of his deception, but he threatens to expose her secret identity if she tells her parents about him. Later, though, he saves Supergirl from a Kryptonite meteor which she is exposed to undersea. But his powers fade too soon, he develops a deadly case of the bends, and he dies in Supergirl's arms, asking her not to tell the Danvers of his deception. She complies, giving Biff a hero's burial in Atlantis.

I wonder if the writer of the Star Trek "No Kill I" episode was influenced by the first story?

Retrieved from "https://heykidscomics.fandom.com/wiki/Action_Comics_Vol_1_303?oldid=1483088"
Community content is available under CC-BY-SA unless otherwise noted.