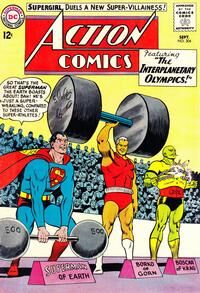 Appearing in "The Interplanetary Olympics!"Edit

Synopsis for "The Interplanetary Olympics!"Edit

Alien criminals attempt to drain some of Superman's energy for their own purposes by inviting him to compete in an “Interplanetary Olympics,” but Superman sees through the ruse and deliberately refrains from expending his power.

Appearing in "The Maid of Menace!"Edit

Synopsis for "The Maid of Menace!"Edit

Zora Vi-Lar, a Kandorian scientist and admirer of Lesla-Lar, vows to take revenge on Supergirl in Lesla's behalf and becomes the masked Black Flame, leaving the bottle city and enlarging herself by flying through the Red Kryptonite cloud in space. Her plan is to convince Supergirl that she is the evil far-future descendant of Supergirl herself, so that Supergirl will remove her own powers by Gold Kryptonite exposure in order to prevent her descendants from inheriting them. The plot almost works, but the sight of a dental filling in Black Flame's mouth cues Supergirl that her foe cannot have been born invulnerable. Thus, Supergirl uses Gold Kryptonite on Black Flame herself, taking away her powers. Shrunken to tiny size again, Black Flame is taken into custody in Kandor.

Retrieved from "https://heykidscomics.fandom.com/wiki/Action_Comics_Vol_1_304?oldid=1483089"
Community content is available under CC-BY-SA unless otherwise noted.