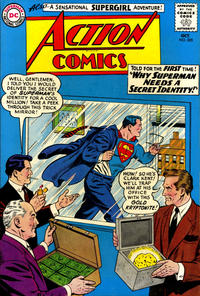 Appearing in "Why Superman Needs A Secret Identity!"Edit

Synopsis for "Why Superman Needs A Secret Identity!"Edit

Clark Kent manages to foil Benny the Blaster’s attempt to kill the Daily Planet staff with a bomb without giving away his secret identity.

Appearing in "The Girl Who Hated Supergirl!"Edit

Synopsis for "The Girl Who Hated Supergirl!"Edit

Karen Blair has a grudge against Supergirl, because her father, an astronomer who used a "hyper-ray transmitter" to communicate in code with aliens on the distant world of Daxnar III, was killed by a dark object from space which intersected his transmission rays, spouted fire into the observatory, and gave him a heart attack. Her brother Bill was also crippled in the fire, which took place the same day that Supergirl came to Earth. Karen believes that Supergirl's rocket caused the disaster. But Supergirl hooks up a chronoscope invented by Superman to show Karen the truth: that her father's death was caused by a space-bat, attracted by his transmitter. Karen repents and begs forgiveness. In return, Supergirl gets famous surgeons to operate on Bill's legs and return his mobility, and she gives the designs of Dr. Blair's transmitter to the National Space Agency.

Retrieved from "https://heykidscomics.fandom.com/wiki/Action_Comics_Vol_1_305?oldid=1483090"
Community content is available under CC-BY-SA unless otherwise noted.