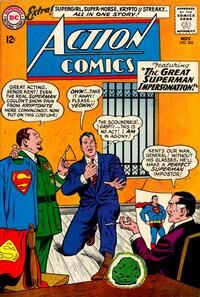 Appearing in "The Great Superman Impersonation!"Edit

Synopsis for "The Great Superman Impersonation!"Edit

Clark Kent is kidnapped by a Latin American general to serve as a double for Superman in a plot to assassinate his country’s president.

Appearing in "The Maid of Doom!"Edit

Synopsis for "The Maid of Doom!"Edit

To prepare Earth for conquest, the Plasmos of the planet Mutor, who have the power to transform their bodies, send their secret agent Sklor to eliminate Supergirl and Superman. First, imitating Supergirl, Sklor tricks Superman, Krypto, Streaky, Comet, and the Kandorians into going to the 40th Century. Then he imitates Superman, Krypto, Streaky, Comet, and Mr. Mxyzptlk in succession, pretends to die and glow blue when Supergirl touches him, and convinces her she has gained the "touch of death" for super-beings. However, Supergirl deduces the truth when she hears Comet speaking to her instead of using telepathy. She forces the Mutorians to sign a peace treaty and abandon war forever.

Retrieved from "https://heykidscomics.fandom.com/wiki/Action_Comics_Vol_1_306?oldid=1483091"
Community content is available under CC-BY-SA unless otherwise noted.