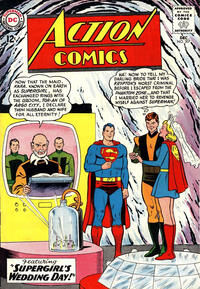 Clark Kent has a contract put on his head by gang-boss “King” Kobra, and Superman, in disguise, takes the job of rubbing himself out.

Tor-An, a convict from the Phantom Zone, puts into action their plan to have Supergirl married to him and thus disgrace her and Superman forever when they learn of his criminal past. After escaping through a dimensional rift accidentally created by Supergirl, Tor-An assumes the identity of a teacher at Midvale High, reveals his Kryptonian identity to her, and romances her, telling her that his father also rocketed her away from Krypton. Supergirl plans to marry Tor-An, even though her telepathic friends Comet and Jerro warn her that he is shielding his thoughts from them. Comet, Jerro, and Lori Lemaris summon Saturn Girl of the Legion of Super-Heroes from the future. She uses her superior mental powers to read Tor-An's mind, divine his scheme, and take Supergirl's place at the wedding in disguise. Tor-An is recaptured and later returned to the Phantom Zone.

Retrieved from "https://heykidscomics.fandom.com/wiki/Action_Comics_Vol_1_307?oldid=1483092"
Community content is available under CC-BY-SA unless otherwise noted.