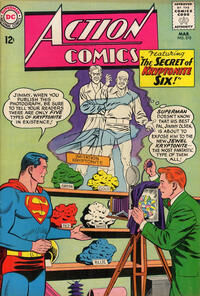 Appearing in "Secret of Kryptonite Six!"Edit

Synopsis for "Secret of Kryptonite Six!"Edit

Jax-Ur tricks Superman into taking him along on a mission back to old Krypton before its destruction, to gain a cure for an Atlantean plague--and, unknown to the Man of Steel, a form of crystal which is used to form Jewel Kryptonite.

Supergirl finally makes contact with her parents in the Survival Zone through an "ultra-sensitive radar screen", and Zor-El mentally instructs her in constructing an "ionic ray" to free them from the Zone. The device almost malfunctions when she uses it due to a power brownout in Midvale, but Fred Danvers, an electrical engineer, sets things to rights and Zor-El and Allura emerge from the Survival Zone into Earth. Supergirl has a joyous reunion with her real parents and introduces them to her foster parents. However, the tearful dilemma of which parents Supergirl will live with is posed. Ultimately, Zor-El and Allura decide to leave Supergirl in the Danvers' care, and, with the help of a shrink-ray, go to live among their own people in Kandor.

Retrieved from "https://heykidscomics.fandom.com/wiki/Action_Comics_Vol_1_310?oldid=1483094"
Community content is available under CC-BY-SA unless otherwise noted.