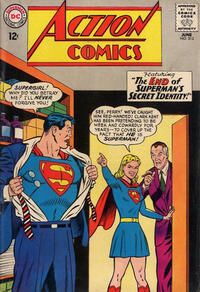 Appearing in "The End of Clark Kent's Secret Identity!"Edit

Synopsis for "The End of Clark Kent's Secret Identity!"Edit

The Android Master, a member of the Superman Revenge Squad, abducts Superman's friends and co-workers at the Daily Planet, substitutes android doubles for them, and hopes to break his spirit by having the doubles, whom he will believe are his real friends, betray him. But Superman deduces the truth and foils the plot, and the Android Master dissolves his androids.

The FBI, while processing Lena Thorul's application, requests her to interview several criminals for a paper on criminology. While interviewing Lex Luthor, her ESP abilities make her realize that she is his sister, and he regretfully tells her how she got her powers by contacting a space-brain. Lena runs away in a state of shock, gets amnesia, and eventually winds up in Africa in a zebra-skin costume. Calling herself the Jungle Princess, she uses her mental abilities to defend her animal friends against poachers. A stray shot from a hunter for a circus grazes her head and restores Lena's memory, and she returns to the United States to perform with the animals as a circus trainer. After Supergirl subs for Lena in a performance, Lex Luthor, who has broken jail, gives his sister a rare strain of plant he has developed, whose fumes cause whomever breathes them to forget unpleasant memories. Thus, Lena's memories that she is Luthor's sister are suppressed, and she forgets her "Jungle Princess" identity. Supergirl decides privately to tell the FBI what occurred, so that Lena's application will not be held up.

Retrieved from "https://heykidscomics.fandom.com/wiki/Action_Comics_Vol_1_313?oldid=1396423"
Community content is available under CC-BY-SA unless otherwise noted.