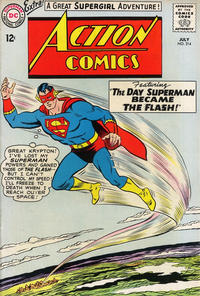 Appearing in "The Day Superman Became the Flash!"Edit

Synopsis for "The Day Superman Became the Flash!"Edit

Superman is summoned by five fellow members of the Justice League to view an artifact they have found. It proves to be a videotape from Jor-El, showing how he ran six different computer simulations on what Kal-El’s life would be, if he was rocketed to any one of six different planets. On each planet, Kal-El would have grown up to be a super-hero--a tiny-sized hero on a world of giants, the hero of a world of mermen, an archer-hero on a red sun world, a costumed detective on a world of night, and a super-fast hero on an Earth-like world. But Jor-El discovers that he would not be happy on any of those worlds, and learns that Kal will become Superman on Earth. As the tape ends, Superman realizes why his five comrades have greeted him--because, on the five other worlds, he would have become a version of the Atom, Aquaman, Green Arrow, Batman, and the Flash.

In Kandor, Allura is wasting away due to heartbreak over being separated from her daughter, Supergirl. The Kandorians contact Fred and Edna Danvers, and they attempt to treat Supergirl so badly that she will opt to leave them and join her natural parents in Kandor. But Supergirl learns the truth, and the Danverses confess and reveal her mother's plight. Thus, the Danverses switch places with Zor-El and Allura, going to Kandor while the two Kryptonian parents emerge on Earth. Linda Danvers leaves Midvale and functions only as Supergirl with her parents for the time being. At the same time, Edna Danvers suffers from the loss of her foster daughter, and the Kandorians send her a girl to adopt, Dar-Lin, who is the very image of Linda Danvers. Edna is still not certain she wants to adopt a girl who looks like her ex-foster daughter.

Retrieved from "https://heykidscomics.fandom.com/wiki/Action_Comics_Vol_1_314?oldid=1396424"
Community content is available under CC-BY-SA unless otherwise noted.