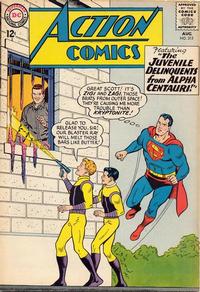 Appearing in "The Juvenile Delinquents from Space!"Edit

Synopsis for "The Juvenile Delinquents from Space!"Edit

Zigi and Zagi, two boys from Alpha Centauri, cause trouble for Earth and Superman with their super-scientific gimmicks. But after he convinces them to return to their homeworld, the Man of Steel learns that an escaped convict has stowed away in their spacecraft.

Appearing in "The Menace of Supergirl's Mother!"Edit

Synopsis for "The Menace of Supergirl's Mother!"Edit

Dar-Lin's real parents are found in a cave, and she is reunited with them. Edna Danvers's continuing grief over her separation from Supergirl, and her resentment of Zor-El and Allura, is spurred to the max by an accidental injection of venom from a Kandorian Srang beast, whose secretions cause its victims to hate whatever they were thinking of at the moment of injection. Thus, Edna sedates Fred, disguises herself as "Bira", a Kryptonian actress, leaves the Kandor bottle, and lures Zor-El and Allura into a Kryptonite deathtrap. But Supergirl sees the deed, saves her parents, angrily denounces Edna, and has the Supergirl Emergency Squad return her foster mother to Kandor. When the truth of Edna's condition comes out and the Srang venom wears off, Edna is tearfully repentant, and Supergirl forgives her. But Supergirl is still torn between two sets of parents, and none of them seem to know what to do.

Retrieved from "https://heykidscomics.fandom.com/wiki/Action_Comics_Vol_1_315?oldid=1483097"
Community content is available under CC-BY-SA unless otherwise noted.