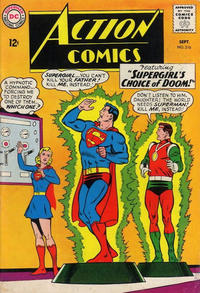 Superman tracks Zigi and Zagi back to their homeworld, where the two boys attempt to play matchmaker for Superman and their aunt Zyra.

Appearing in "Supergirl's Choice of Doom!"Edit

Synopsis for "Supergirl's Choice of Doom!"Edit

Zor-El has Supergirl use a Kryptonian super-computer to project a simulation of what their future will be like if he and Allura remain on Earth. The computer predicts that a monster called the Zygor, who possesses hypnotic powers and wants revenge on Zor-El, will take over Supergirl's mind, lure Zor-El and Superman into a deathtrap, and force her to kill one of them. Supergirl destroys the computer before she can see which one she would have killed. Zor-El tells her that they can forego that future by he and Allura electing to stay in Kandor. Supergirl agrees, and her natural parents are exchanged for the Danverses. The family returns to Midvale to start their life anew. Meanwhile, in Kandor, Zor-El and Allura muse over the fact that they knowingly fed false data into the computer, and then go check up on the skeleton of the Zygor, who was sent into the Phantom Zone, released and put in a Kandorian zoo, and died in captivity.

Retrieved from "https://heykidscomics.fandom.com/wiki/Action_Comics_Vol_1_316?oldid=1483098"
Community content is available under CC-BY-SA unless otherwise noted.