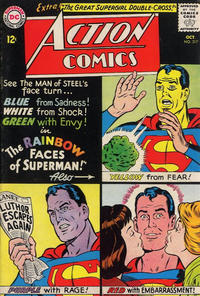 A Red Kryptonite exposure causes Superman’s face to turn different colors in tune with his emotions, which makes it difficult for him to keep his identity secret from Lois Lane.

Appearing in "The Great Supergirl Double-Cross!"Edit

Synopsis for "The Great Supergirl Double-Cross!"Edit

Lena Thorul has fallen in love with Jeff Colby, a mysterious man whom Supergirl, with her super-vision, has seen consorting with the spies who operate in a Spy-Dome three miles off the coast of America. To save Lena the heartbreak of knowing her beloved is a traitor, Supergirl hypnotizes him into falling in love with Linda Danvers, then forgetting it, but being jilted by Lena anyway. But when she tries to tell the FBI about Colby, she learns that Jeff is really an FBI agent working against the Spy-Dome! To make up for her blunders, Supergirl tows the Spy-Dome within the legal limit of the U.S.'s jurisdiction so that the spies can be arrested. Then she (with the help of Jeff and a Jeff Colby robot) explains all, or most, of what she did and the reasons why she did it. Jeff and Lena resume their relationship and get married.

Retrieved from "https://heykidscomics.fandom.com/wiki/Action_Comics_Vol_1_317?oldid=1483099"
Community content is available under CC-BY-SA unless otherwise noted.