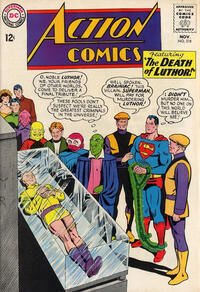 Appearing in "The Death of Luthor!"Edit

Synopsis for "The Death of Luthor!"Edit

Lex Luthor escapes from jail, rockets to the red-sun world of Lexor again, and marries Ardora. Superman follows him there, losing his powers under the red sun, and appears to accidentally kill Luthor in a fight. The Lexorians almost kill Superman in mob violence, but Ardora prevails on them to give Superman a trial, though few believe he can win.

Appearing in "Supergirl Goes to College!"Edit

Synopsis for "Supergirl Goes to College!"Edit

Linda Danvers graduates Midvale High School and goes to Stanhope College on a scholarship. While there, she is angered by the sadistic tactics of a sorority princess named Donna Storm, who delights in tormenting pledges. Defiantly, Linda pledges the sorority, puts Donna to shame with her covertly-used super-powers, and makes her repent her evil deeds. When accepted, Linda proposes that the sorority discontinue their policy of hazing pledges. They accept the proposal. Donna asks Linda to have Supergirl speak to the sorority, and Linda agrees.

Retrieved from "https://heykidscomics.fandom.com/wiki/Action_Comics_Vol_1_318?oldid=1526964"
Community content is available under CC-BY-SA unless otherwise noted.