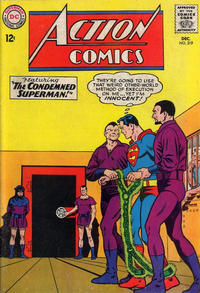 Appearing in "The Condemned Superman"Edit

Synopsis for "The Condemned Superman"Edit

Even though Superman is losing his trial for murder, his lawyers become convinced of his innocence and help him break out of jail. Once freed, Superman discovers Luthor has placed himself in a death-like coma to get his arch-enemy accused of murder. He revives Luthor, is cleared of the murder charge, and is allowed to return to Earth.

Maddened by her loss of status since Linda Danvers showed her up, Donna Storm begins a campaign to restore herself as "Miss Big" on Stanhope's campus. Her schemes include using a computer her father gave her, paying off workers at her family's chemical plant to do her chemistry homework, and using radio-receiver earrings to get "cheat" information broadcasts. But Supergirl thwarts her again and again. Finally, Donna frames Linda for stealing gold and diamonds from a mineral collection in the science building. Linda is expelled. But she gets the help of Shrinking Violet, who alters Donna's radio earrings into transmitters that broadcast Donna's voice thru the school's P.A. system. Then Linda prods Donna into arrogantly confessing to framing her, and, with the evidence heard by the whole college, Linda is reinstated, and Donna, the no-good sorority--uh, Donna is expelled.

Retrieved from "https://heykidscomics.fandom.com/wiki/Action_Comics_Vol_1_319?oldid=1396429"
Community content is available under CC-BY-SA unless otherwise noted.