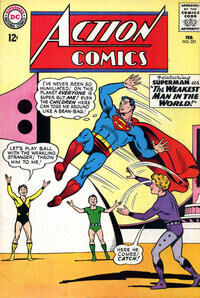 Superman is stranded by super-villains on a red-sun world where he has no powers, but the inhabitants all have super-powers in sunlight.

Appearing in "The Enemy Supergirl"Edit

Synopsis for "The Enemy Supergirl"Edit

Linda Danvers uses Red Kryptonite to produce local vulnerability in her arm so that she can give blood. However, a friend of hers, Debbie Porter, sustains a head injury in a car crash. She is given a transfusion with the blood Linda has donated, and the blood gives her temporary super-powers. Since her head injury has caused her to become evil, she dons a Supergirl uniform and becomes a fake, evil Supergirl. The real Supergirl has a hard time coping with her until she deduces her true identity, weakens her with Kryptonite, gets her to explain, and informs her that blood-transfer super-powers only last about 48 hours. Debbie goes to sleep. When she awakens, she is her normal self again, and thinks her term as the evil Supergirl was just a dream.

Retrieved from "https://heykidscomics.fandom.com/wiki/Action_Comics_Vol_1_321?oldid=1483101"
Community content is available under CC-BY-SA unless otherwise noted.