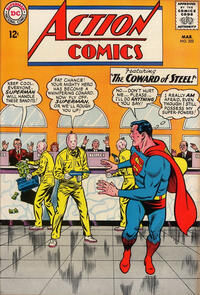 Appearing in "The Coward of Steel!"Edit

Synopsis for "The Coward of Steel!"Edit

Trok and Graz, two members of the Superman Revenge Squad, hit Clark Kent with a ray made by a machine constructed with Kryptonian components. The ray causes Clark Kent to become a coward, but, in his Superman guise, he is his usual courageous self. Superman gets around the problem for a while by adopting the new secret identity of Brad Dexter. However, Supergirl snaps him out of his fear-spell by secretly having him wear a non-invulnerable Superman costume over his Clark Kent clothes. The costume is burned off by friction, and, when Superman sees he is doing a super-feat while in his Clark Kent identity, his fear fades. Superman then throws Trox and Graz's spacecraft into the midst of a space police parade, and the two villains are nabbed.

Appearing in "The Planet of Outcasts!"Edit

Synopsis for "The Planet of Outcasts!"Edit

Supergirl is conned by three villainesses from space who pose as heroines into coming to their planet, Feminax. Once there, she learns that her hosts are actually a traitor, an assassin, and a mass murderess. When Supergirl attempts to leave, she discovers that the prism which filters their yellow sunlight distorts the solar rays enough to make her powers malfunction. The three villainesses, Ran-Kor, Lattora, and Tempra, tell her that they are part of a Sisterhood of Evil ruled by the masked Ravenne, and their greatest ambition is to defeat and destroy Supergirl. Later, Supergirl is conned again by Ran-Kor, who poses as a turncoat, but who gets Supergirl to unwittingly use her brain-power to revive Mata Hari, Lucrezia Borgia, and Lady Macbeth, whom they have brought to Feminax via time-warp.

Retrieved from "https://heykidscomics.fandom.com/wiki/Action_Comics_Vol_1_322?oldid=1483102"
Community content is available under CC-BY-SA unless otherwise noted.