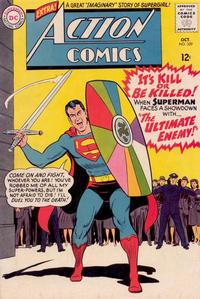 Appearing in "The Ultimate Enemy!"Edit

Synopsis for "The Ultimate Enemy!"Edit

Jon Smatten creates a “knight” which is really a robot made of Kryptonian metal and sends it against his old enemy, Superman.

Appearing in "Drang, the Destroyer!"Edit

Synopsis for "Drang, the Destroyer!"Edit

Supergirl is tricked by Fantasta, an evil sorceress who poses as a stage magician, into being teleported onto her spaceship bound for Gotha, the planet which is home to the Circle of Evil, a band of master space-criminals. Her initiation was to bring back Supergirl dead or alive. Supergirl finds that this sector of space is unknown to her, and she cannot find Earth on her own. However, learning that Fantasta's magic powers are neutralized by water, Supergirl snatches away the amulet which is the source of her powers. Fantasta commits suicide by grasping the legs of Gnomo, her Execution Bird from the planet Cyclon. Supergirl takes Fantasta's costume, disguises herself as the sorceress, and is accepted by Gnomo and the Circle of Evil as Fantasta. However, she finds her powers do not function in the strange environment. Lord Kirol, head of the Circle, gives her one last initiation mission: bring back Drang the Destroyer, a super-powerful evil sorcerer, from the Purple Planet. Drang, at that point, projects an image of himself into the Circle's meeting room and demonstrates his power by destroying a computer. After he fades away, Supergirl boards the spaceship, still lacking powers, and tries to use the magic amulet of Fantasta to return to Earth. But the amulet does not function, and, greeted by an image of Drang, Supergirl finds her spaceship headed for the Purple Planet.

Retrieved from "https://heykidscomics.fandom.com/wiki/Action_Comics_Vol_1_329?oldid=1483109"
Community content is available under CC-BY-SA unless otherwise noted.