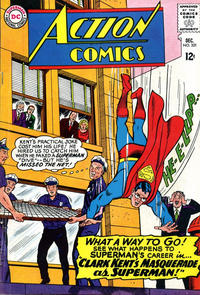 A gag headline story in the Daily Planet claiming that Clark Kent is really Superman causes the Man of Steel some real problems when people at large fail to realize it was meant as a gag.

Dr. Supernatural intends to actuate "Operation Satan", recreating the most terrible crimes of history with him as the criminal. The best efforts of Supergirl and the super-heroes seem to go awry, until she tricks Drang into summoning three terrible villains from the past. When Drang absorbs their evil energy, he overloads and explodes, killing the villains as well. Supergirl finds his cache of spacecraft and uses them to send the super-heroes back to their own worlds, while she returns to Earth. Shortly afterward, she sees a wraith-like concentration of evil energy near the Fortress of Solitude, and wonders if it will eventually accumulate into another Dr. Supernatural.

Retrieved from "https://heykidscomics.fandom.com/wiki/Action_Comics_Vol_1_331?oldid=1483111"
Community content is available under CC-BY-SA unless otherwise noted.