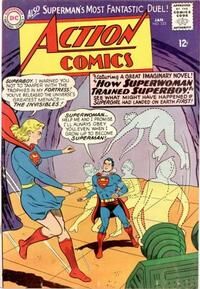 Superman learns that Lex Luthor has escaped his prison planet and has gone to Lexor. Ardora learns from a mento-tape of Lex’s criminal past, and is anguished. Maddened by the revelation, Luthor returns to Earth and safeguards Superman secretly from other crooks’ attempts on his life, bent on saving Superman for his personal vengeance.

Appearing in "How Superwoman Trained Superboy!"Edit

Synopsis for "How Superwoman Trained Superboy!"Edit

Retrieved from "https://heykidscomics.fandom.com/wiki/Action_Comics_Vol_1_332?oldid=1483112"
Community content is available under CC-BY-SA unless otherwise noted.