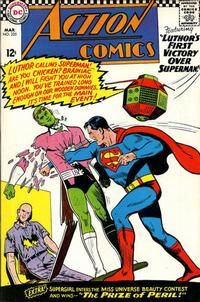 Superman pretends to be rattled to lure Lex Luthor and Brainiac into letting their guard down. When they do, he throws both of them back to Lexor, but doses Ardora with amnesium gas that causes her to forget Lex’s criminal past. Luthor admits to himself that Superman has squared himself for this time, but vows to resume their feud in the future.

Appearing in "The Prize of Peril"Edit

Synopsis for "The Prize of Peril"Edit

Retrieved from "https://heykidscomics.fandom.com/wiki/Action_Comics_Vol_1_335?oldid=1483114"
Community content is available under CC-BY-SA unless otherwise noted.